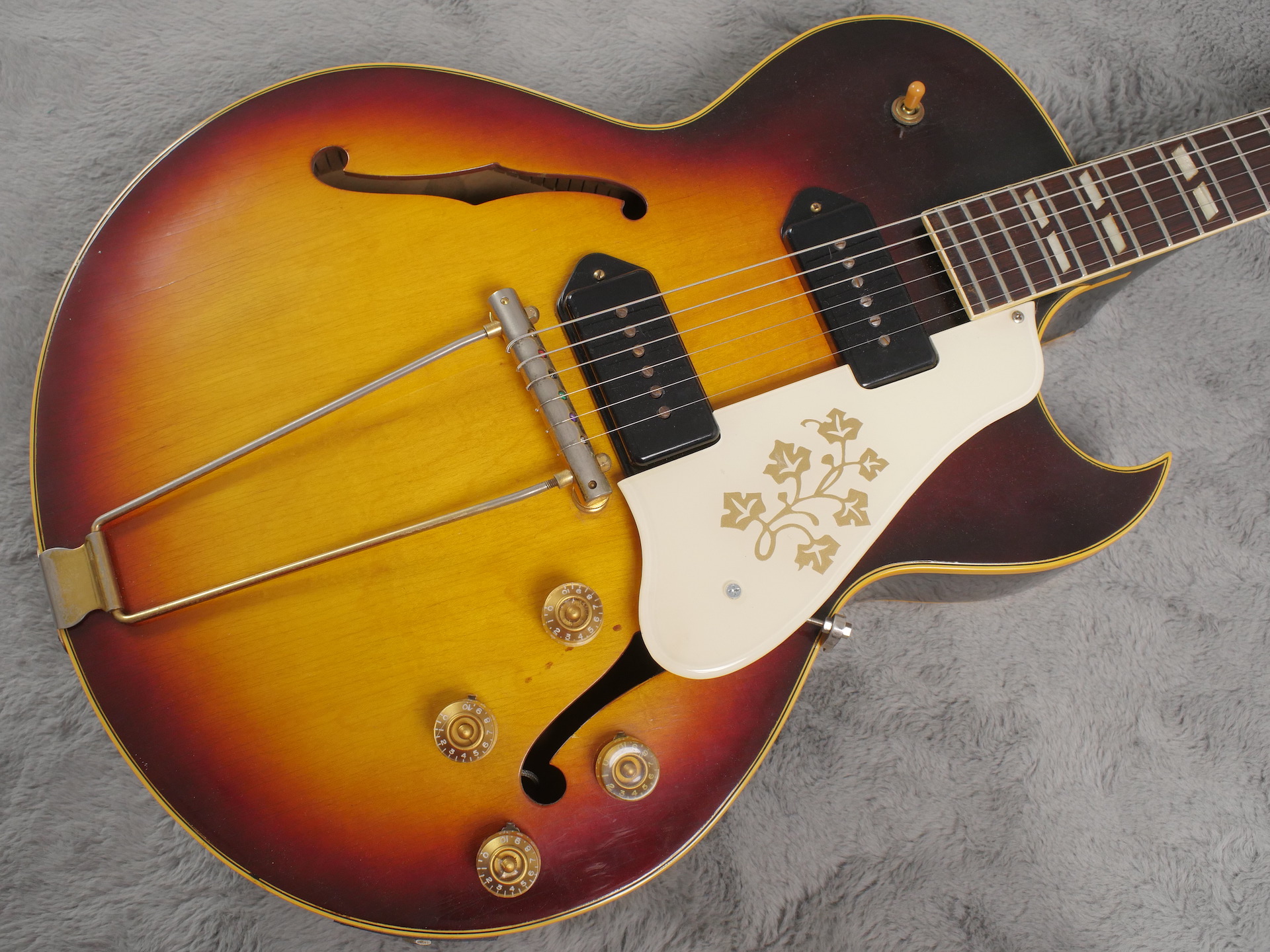 When you've got a gold one, you'll soon wish you had bought the sunburst.....

Les Paul claimed to have devised the ES-295 following a visit to Wood Hospital, Milwaukee where he and Mary Ford were on tour entertaining the troops. There they met a patient, Dean Parker, to whom Les claimed he could get any guitar he wanted. Dean asked for a ‘gold archtop’. The doctor later confided to them that Dean didn’t have long to live, so a call was made to Ted McCarthy asking for “a guitar right now – take an ES-175 and paint it gold”. Gibson’s log does show a gold ES-175 leaving the factory on the 4th December of 1951 though unfortunately Dean never lived to see it.

Introduced in May of 1952 as an upmarket ES-175, there were a few slight differences in design. Aside from the gold finish and twin pickups (the 175 didn’t feature these until 1953), the ES-295 is constructed entirely from maple laminate unlike the 175 that has laminated mahogany back and sides. The ES-295 utilising the wrap-over trapeze tailpiece whilst the 175 has a separate rosewood bridge and tailpiece.

For an instrument approaching its 70th birthday, the original sunburst finish has survived remarkably well. Not such a common finish for this model, there is the expected checking but not too much in the way of fading. The front and back still retain some of the opulent gleam you’d associate with a Gibson archtop but with that added cool of 65 plus years of relicing.

The neck is in good shape, and is not quite as chunky as you would expect for a ‘54. There are no visual signs that is has been shaved down, either by normal or UV light but unless it was a special order, we cannot discount that possibility. The fretboard too looks good with very little wear, the frets which are wide, Gibson ones have plenty of life left in them and still have many of the nibs present.

The plastics have been replaced at some stage. The pickup covers would have originally been ivory coloured Royalite like its golden brethren. The knobs and switch tip have been exchanged for more modern ones as has the pickguard and mounting bracket.

There is the far too common repair by the jack socket which in this case has been done by adding a plate over the hole (see pic).

Electrics, pickups and pots are all original with the exception of one capacitor that has been replaced with a Sprague Orange Drop type.

The hardware is in good condition. The gold plating has worn a little on the trapeze tailpiece but there is no other corrosion. The Kluson no-line tuners are in excellent condition as are the tuner buttons.

The guitar comes with a period correct Brown hardshell case made by Lifton.

Sonically, as with the ES-225 which has a similar tailpiece arrangement, this guitar has much more sustain than you’d expect and a different acoustic tone to that of a ES-175. The pickups as you’d expect are wonderfully earthy, evoking those classic Sun Records tones, though its quite happy down other musical avenues.

An uncommon colour for this model may not be for everyone but this guitar certainly rocks with the best of them. Grab it before it gets away. 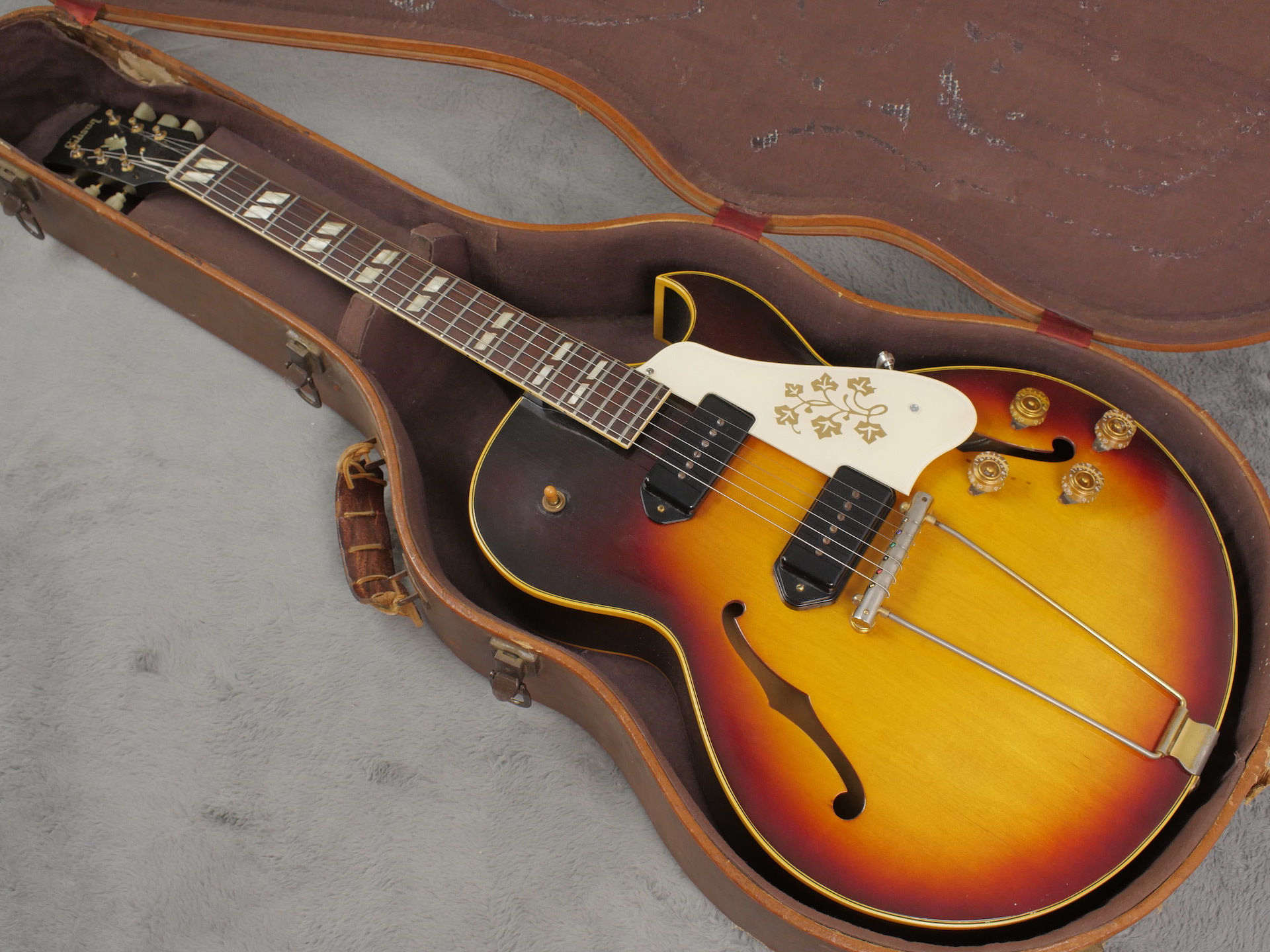 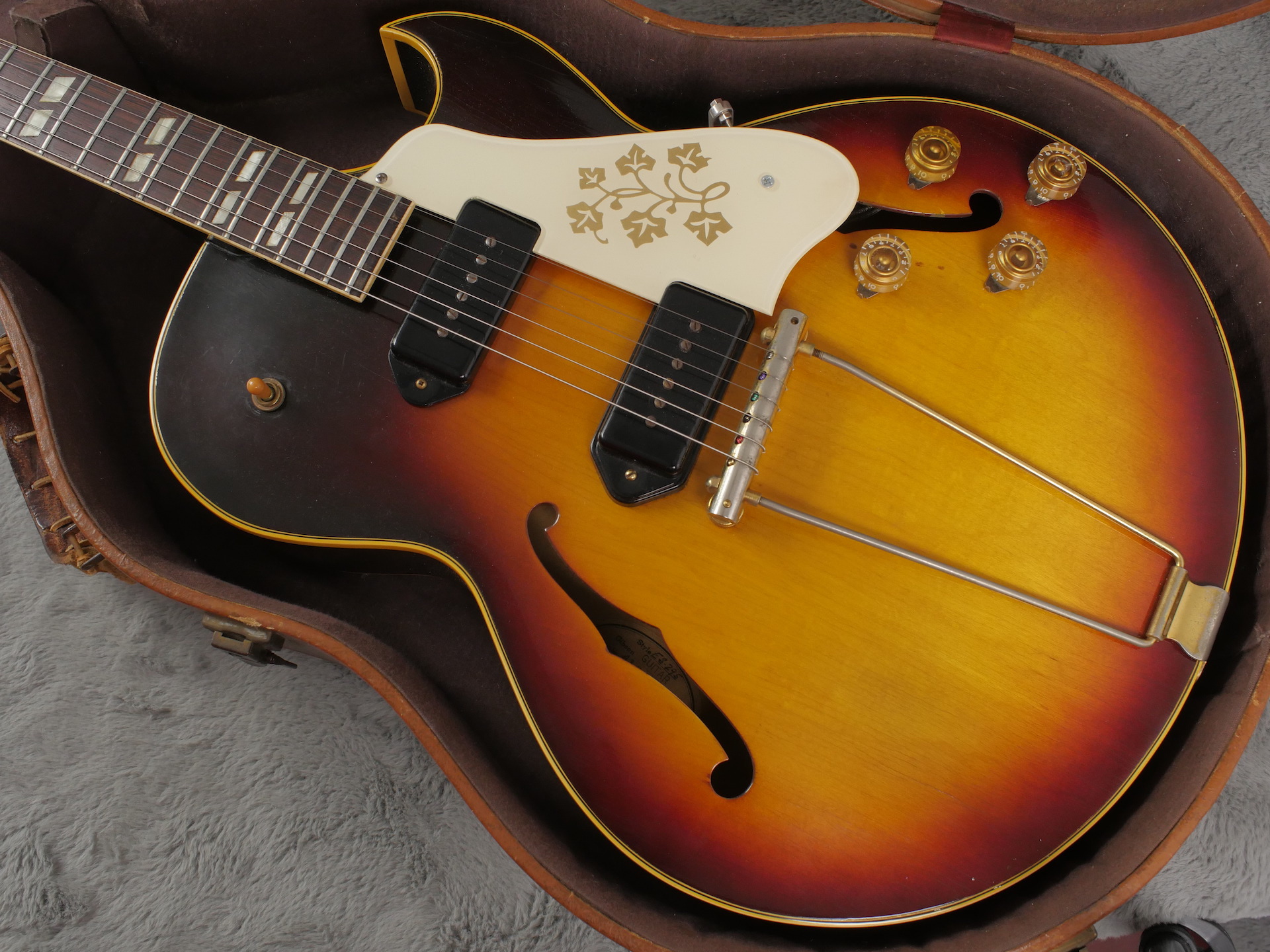 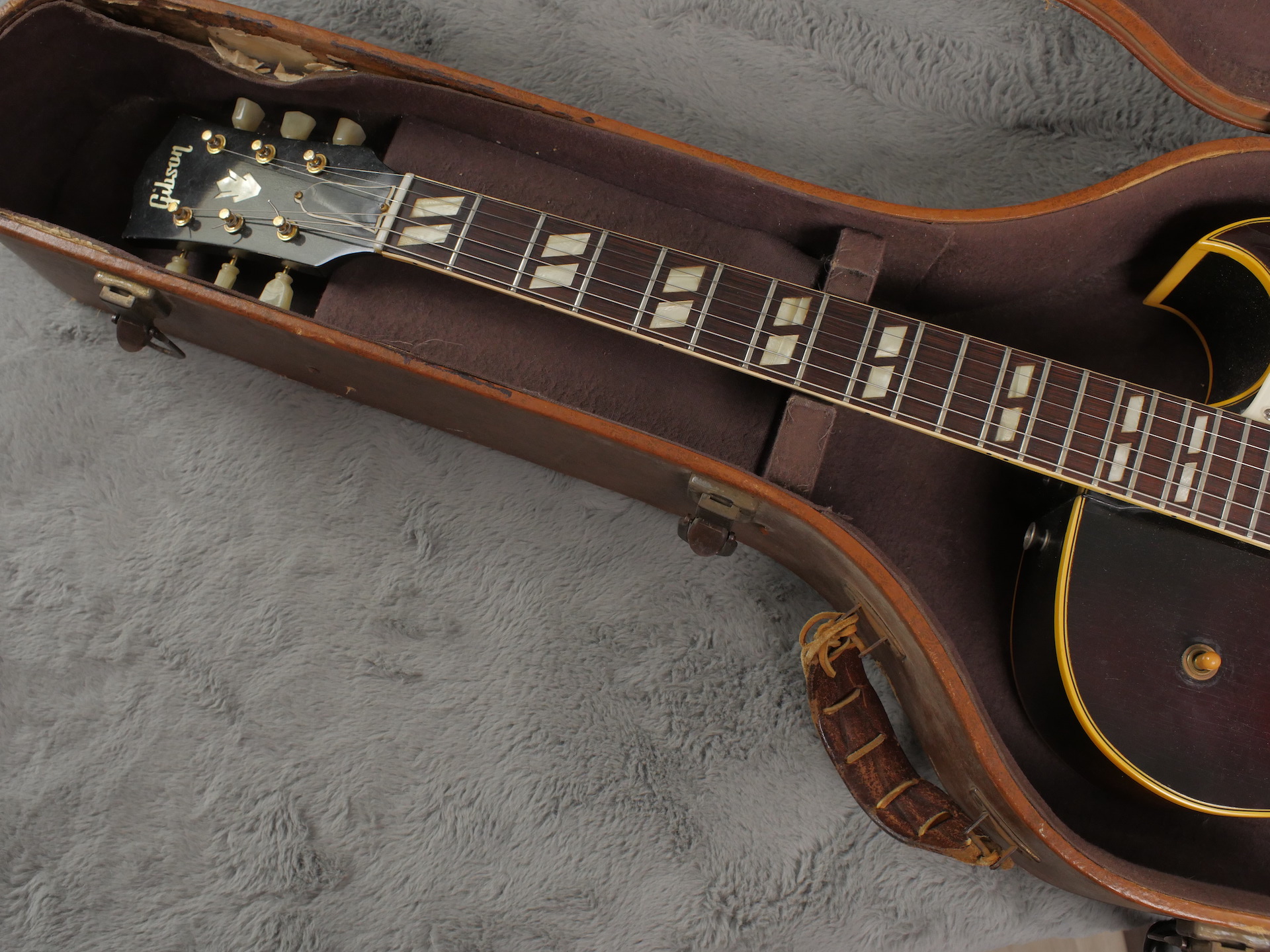 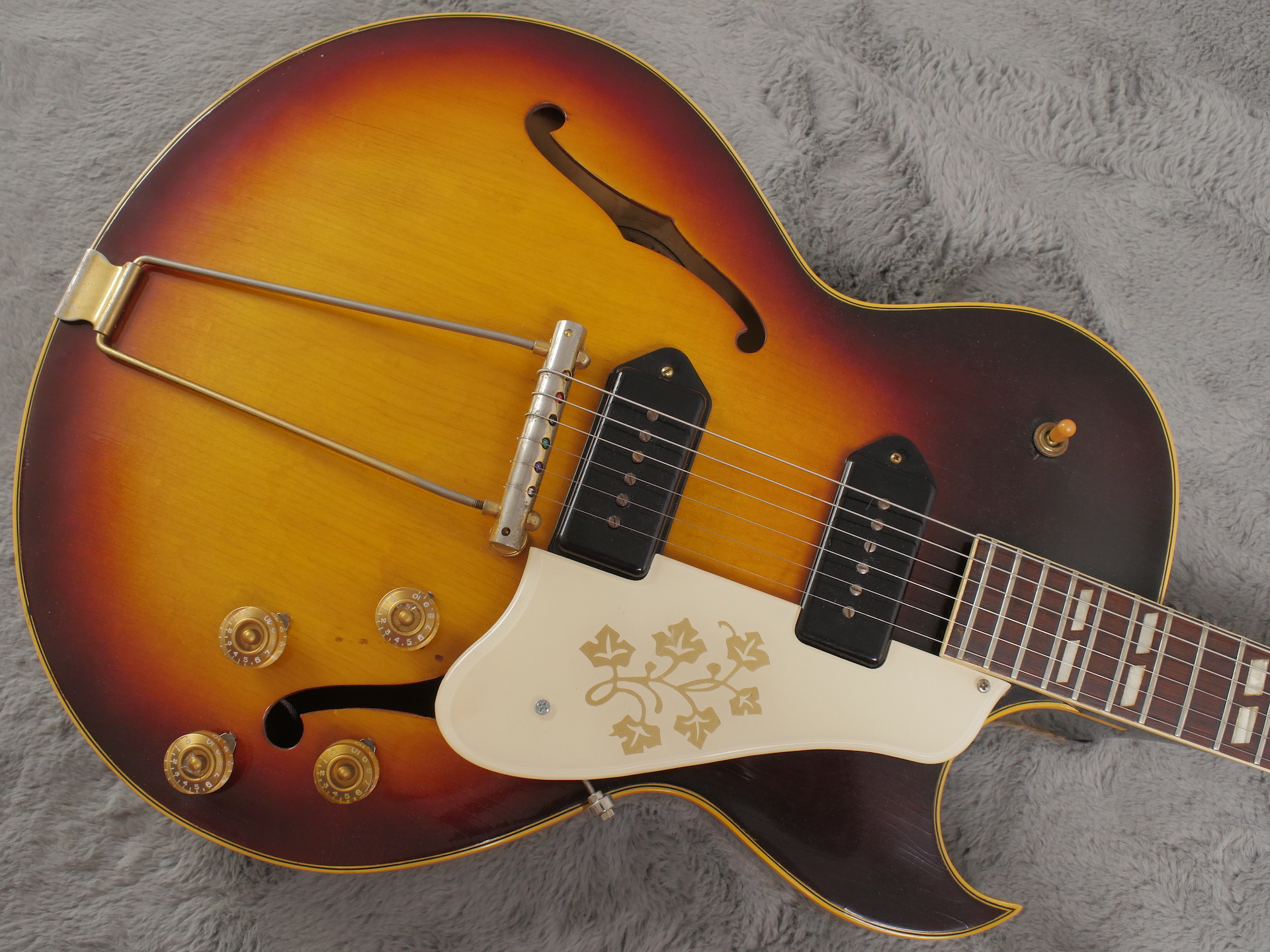 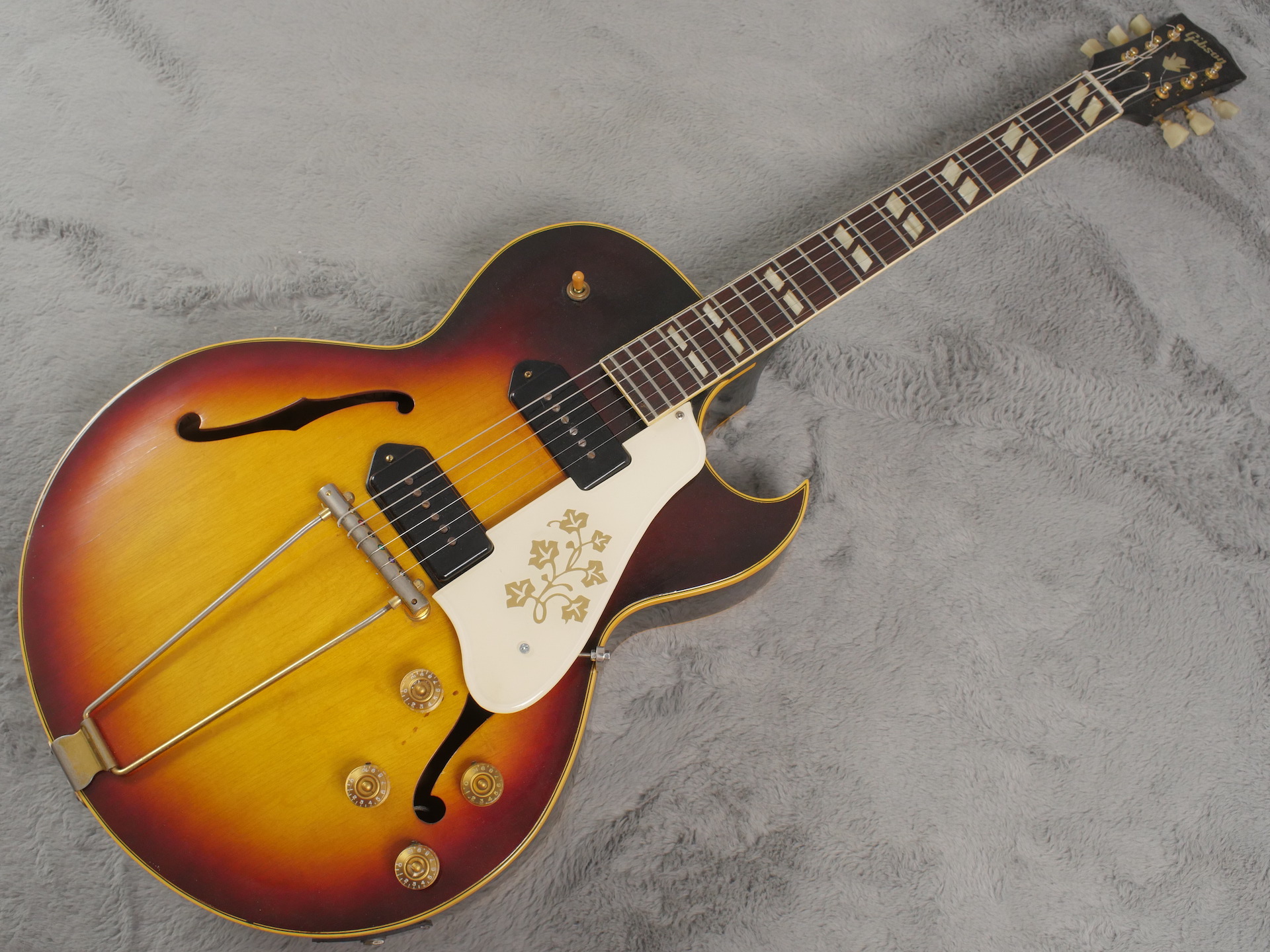 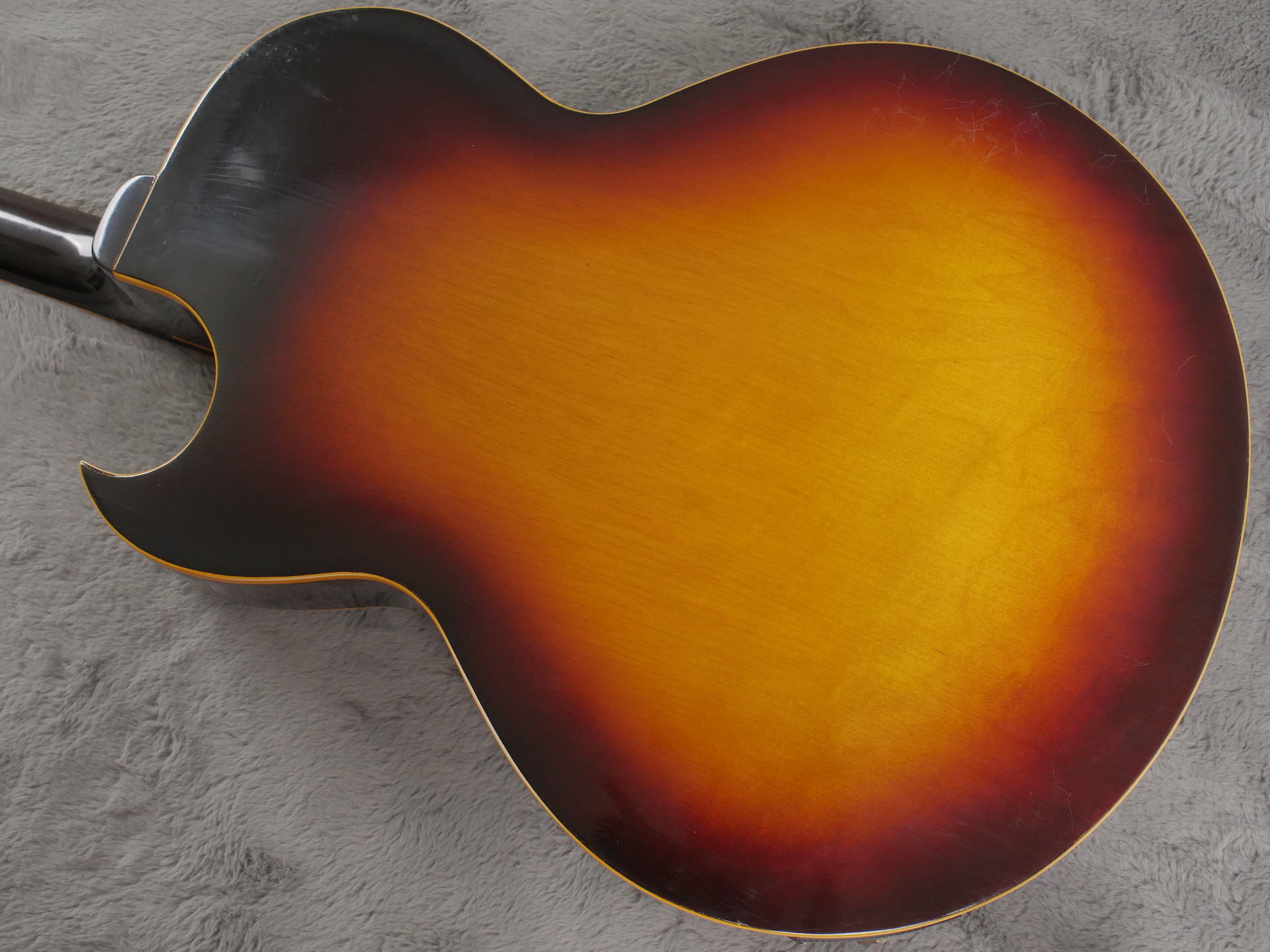 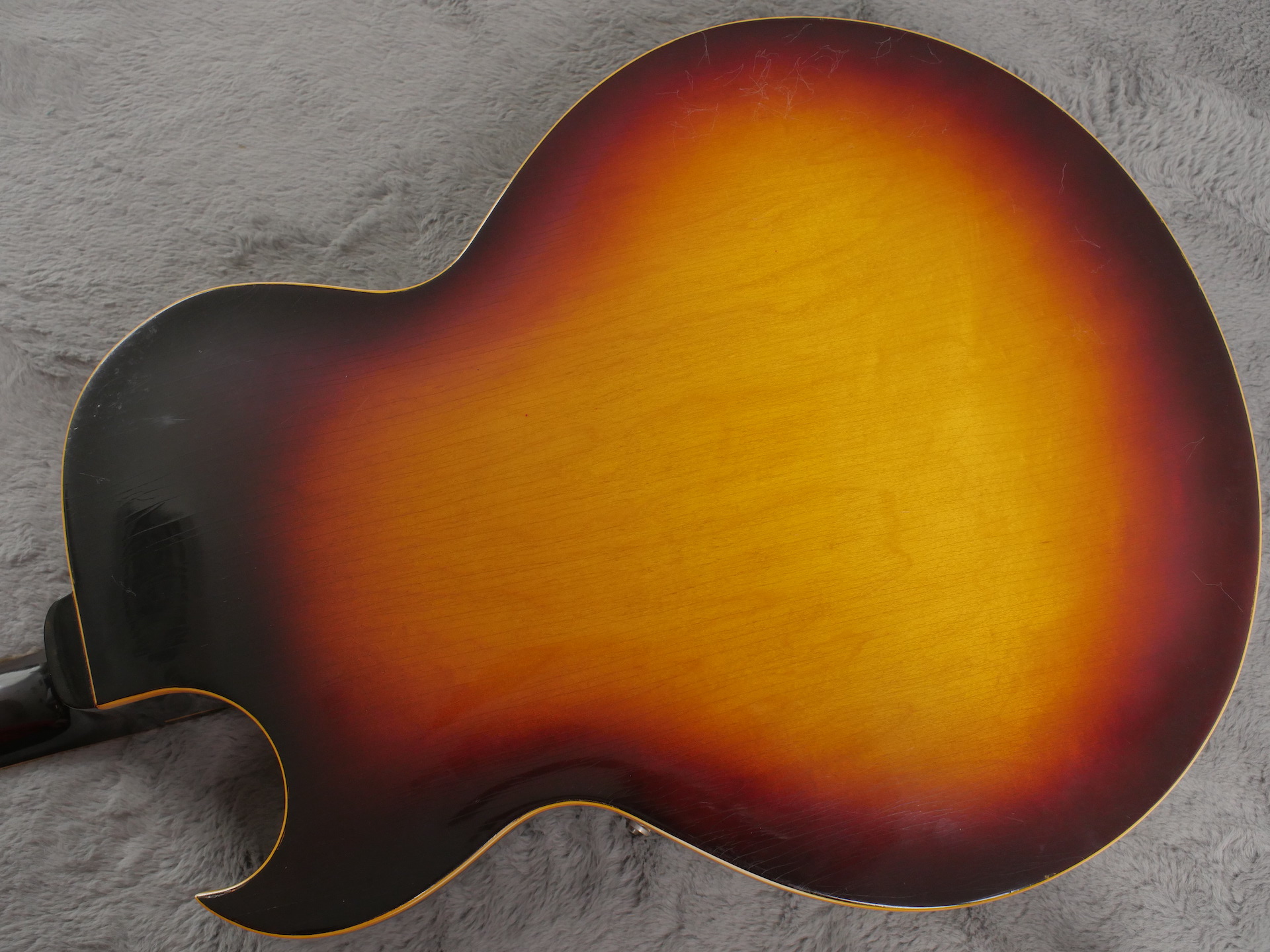 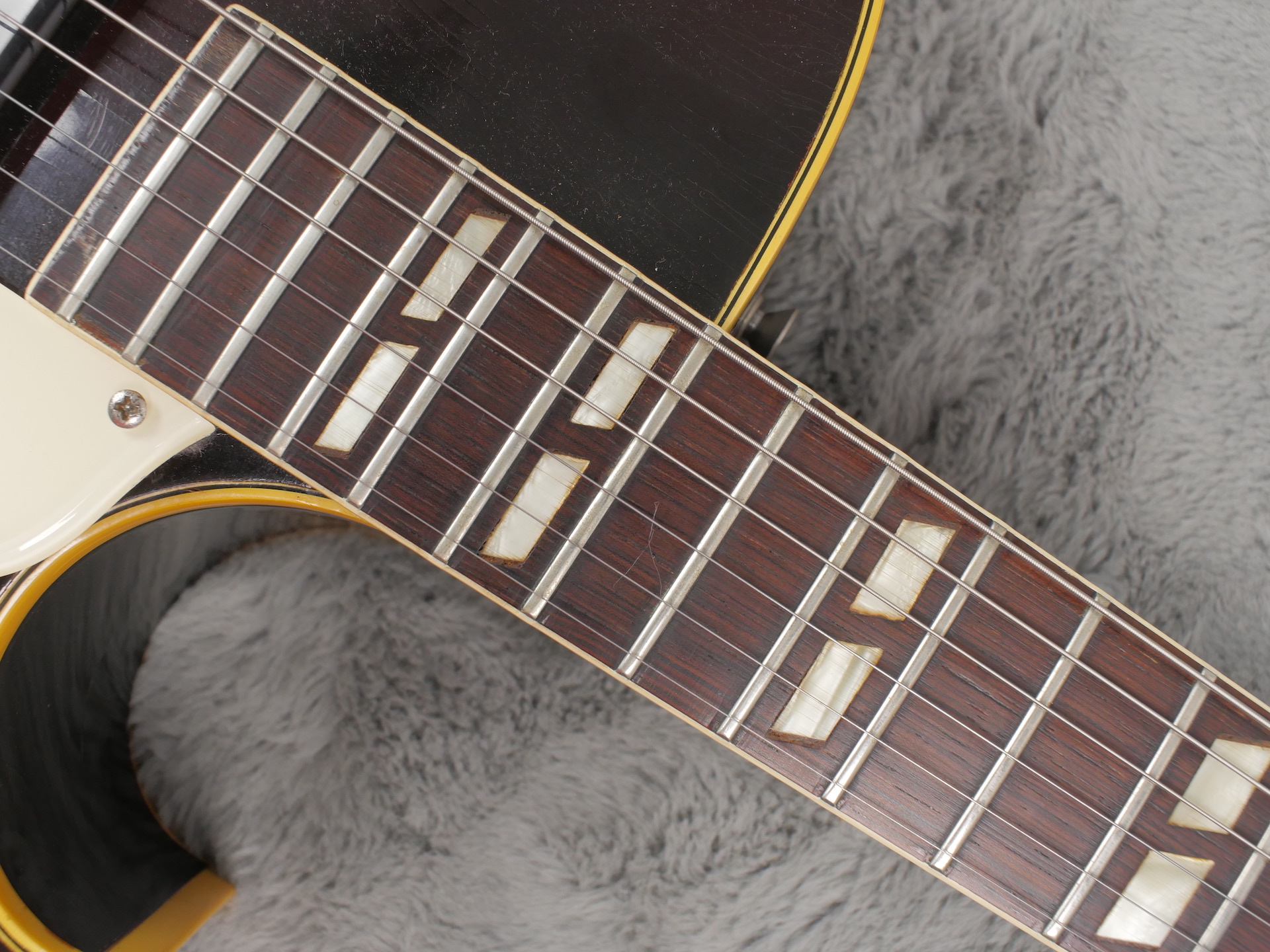 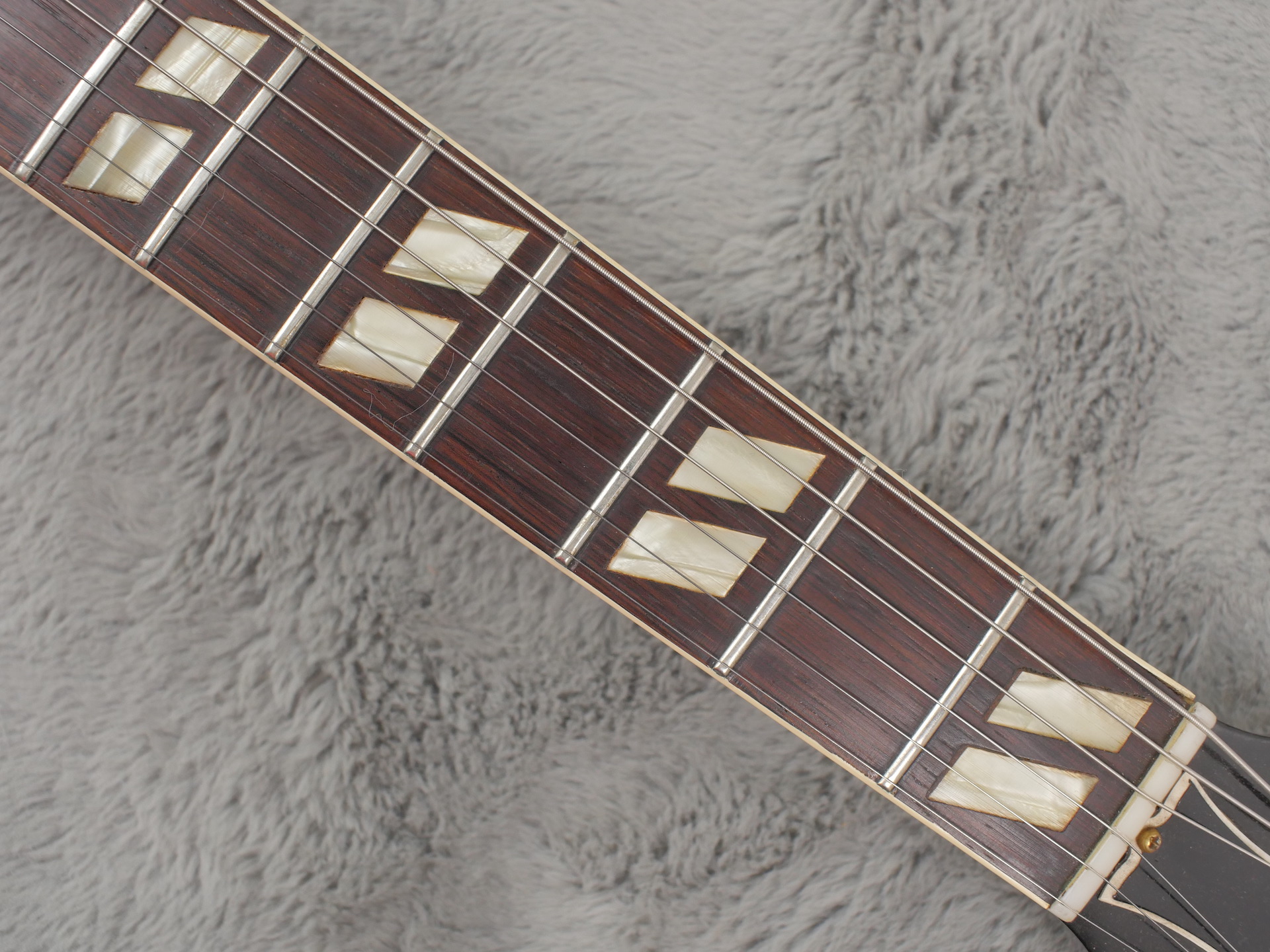 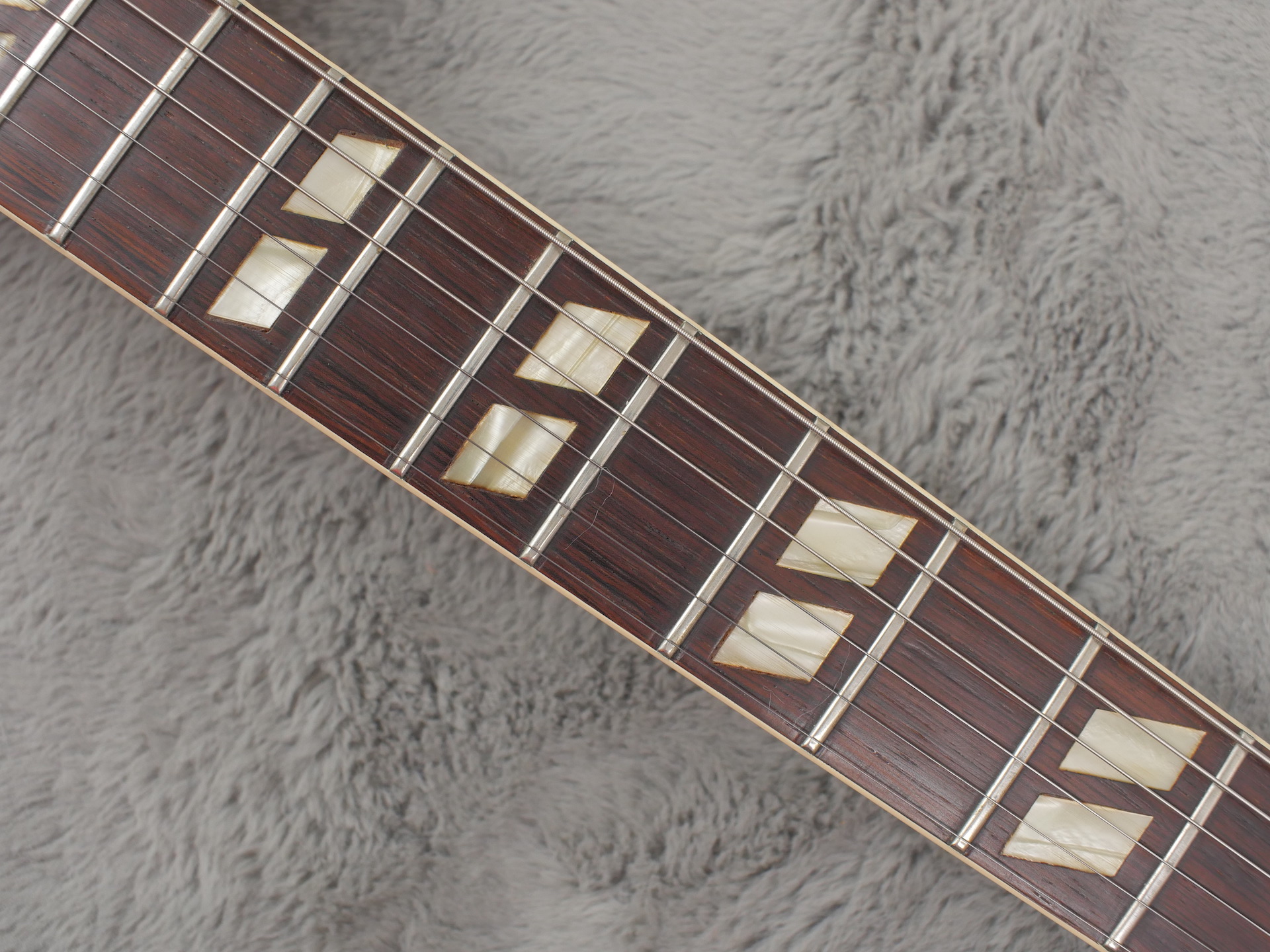 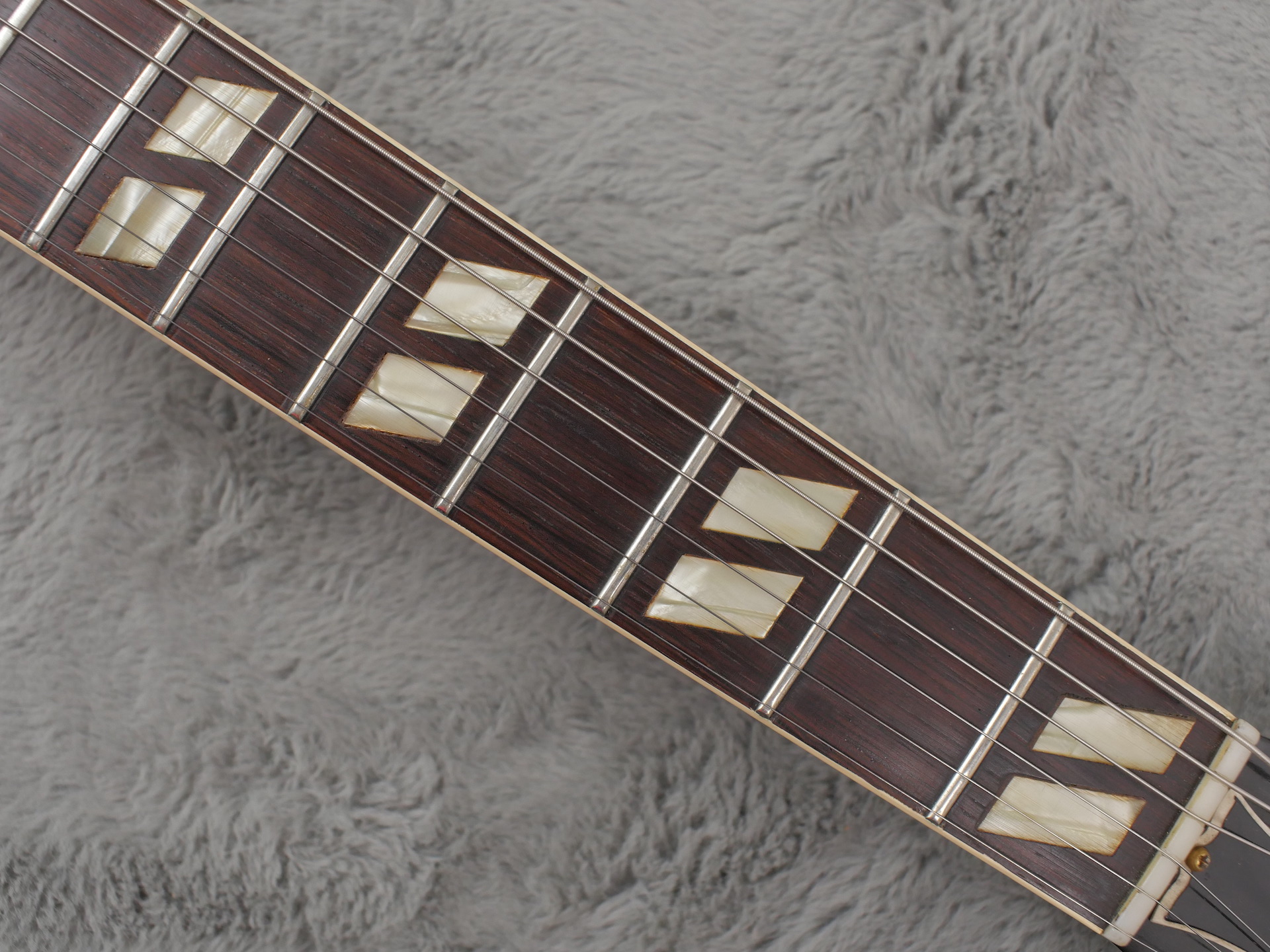 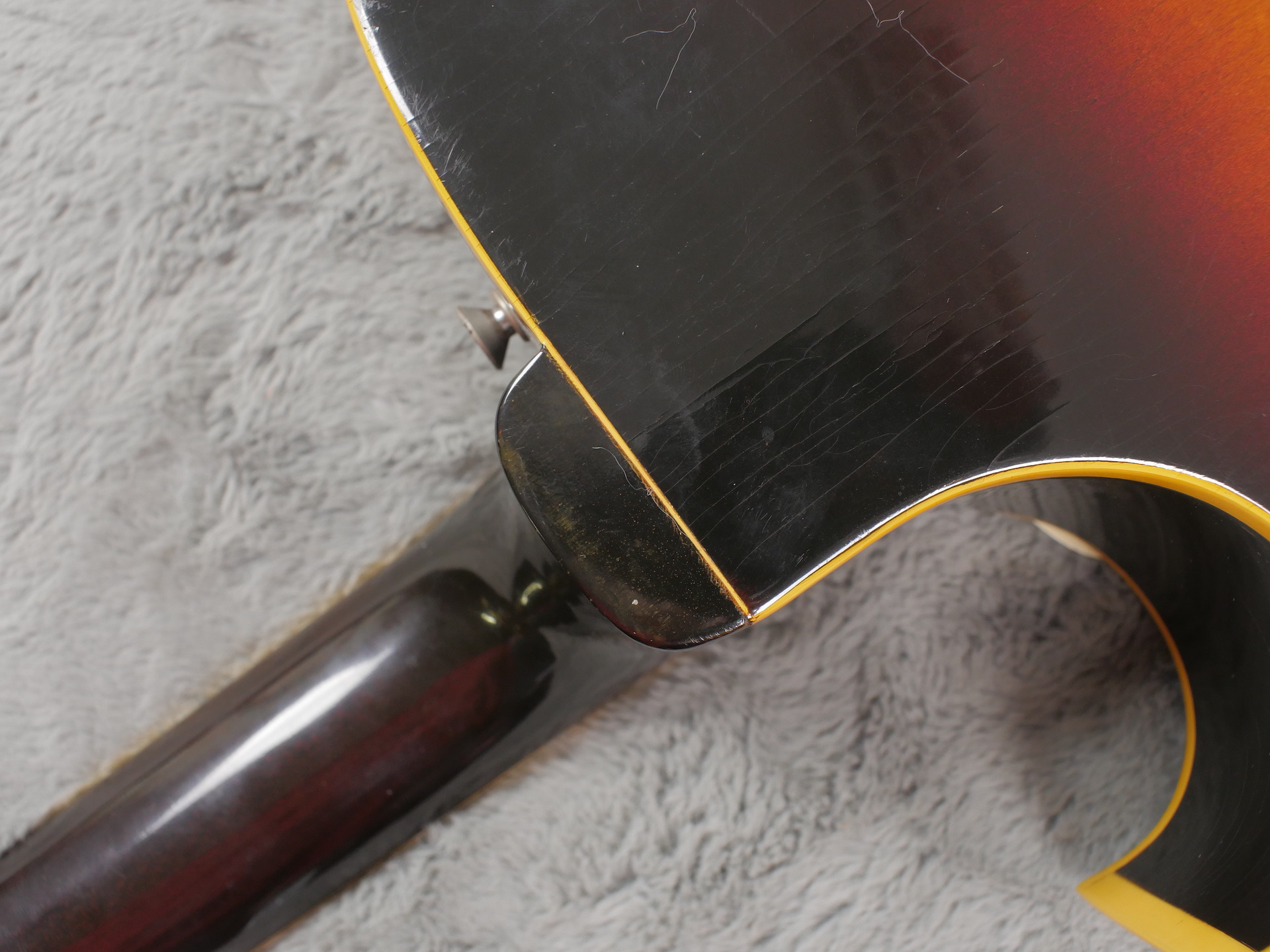 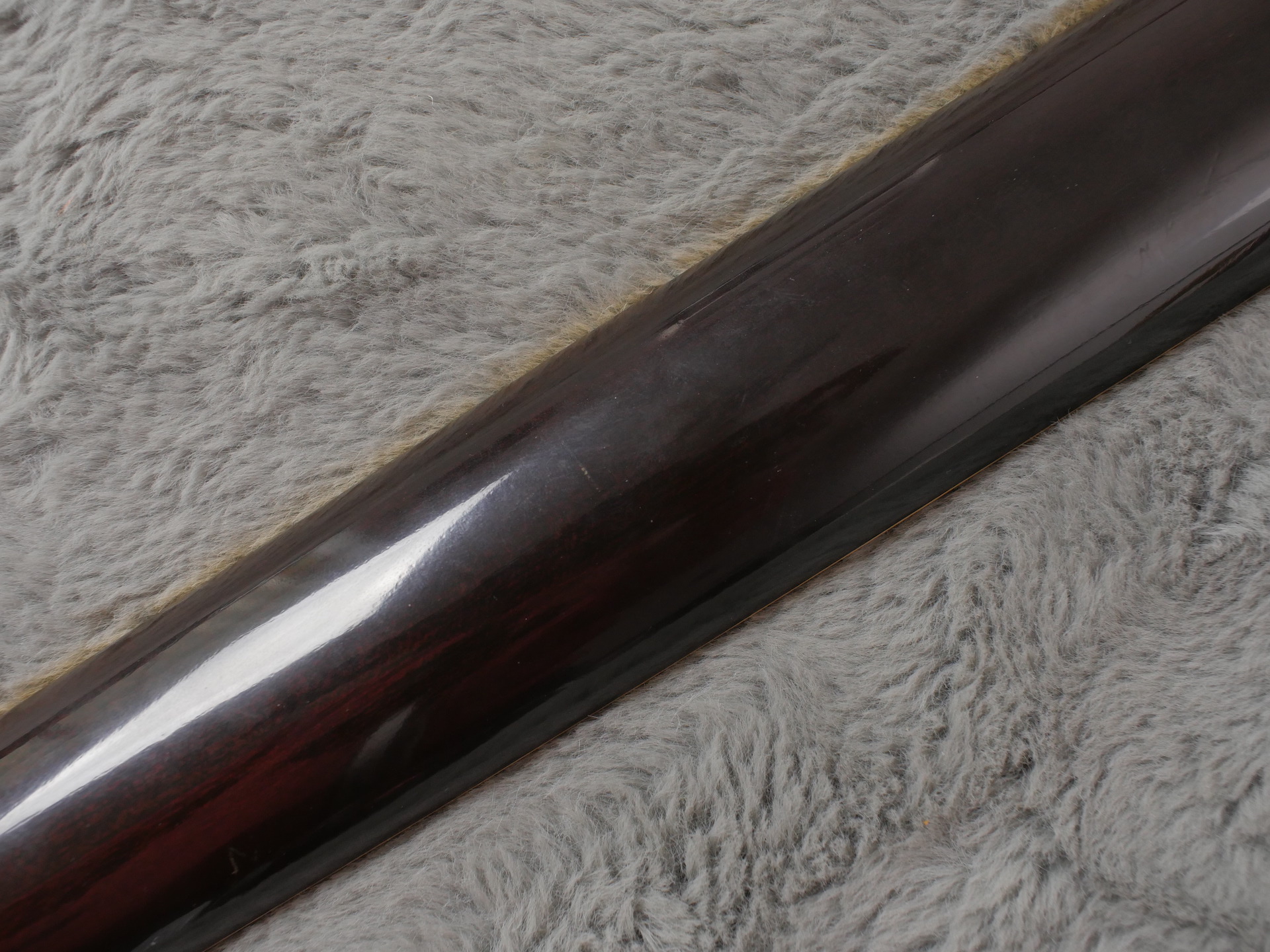 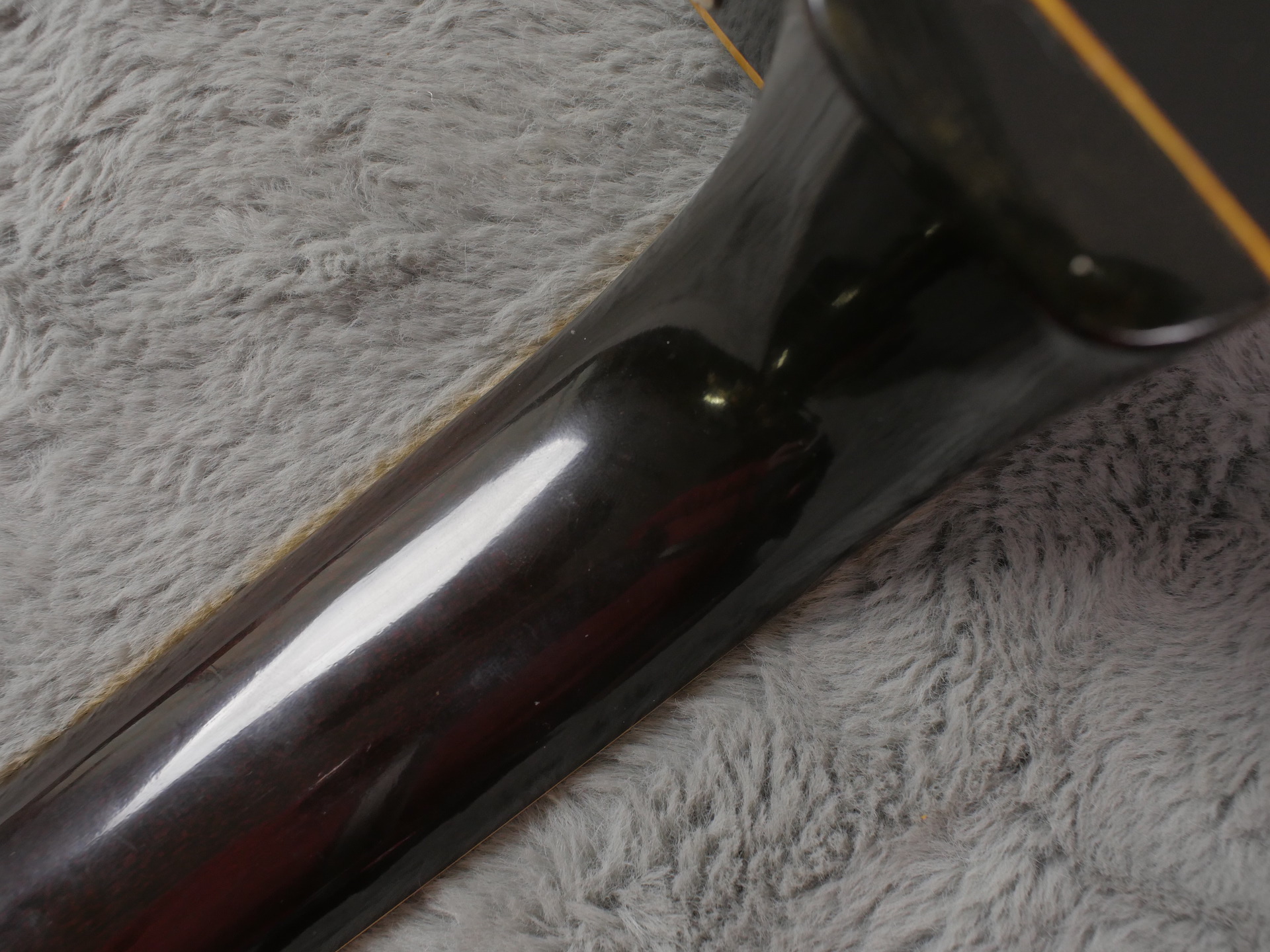 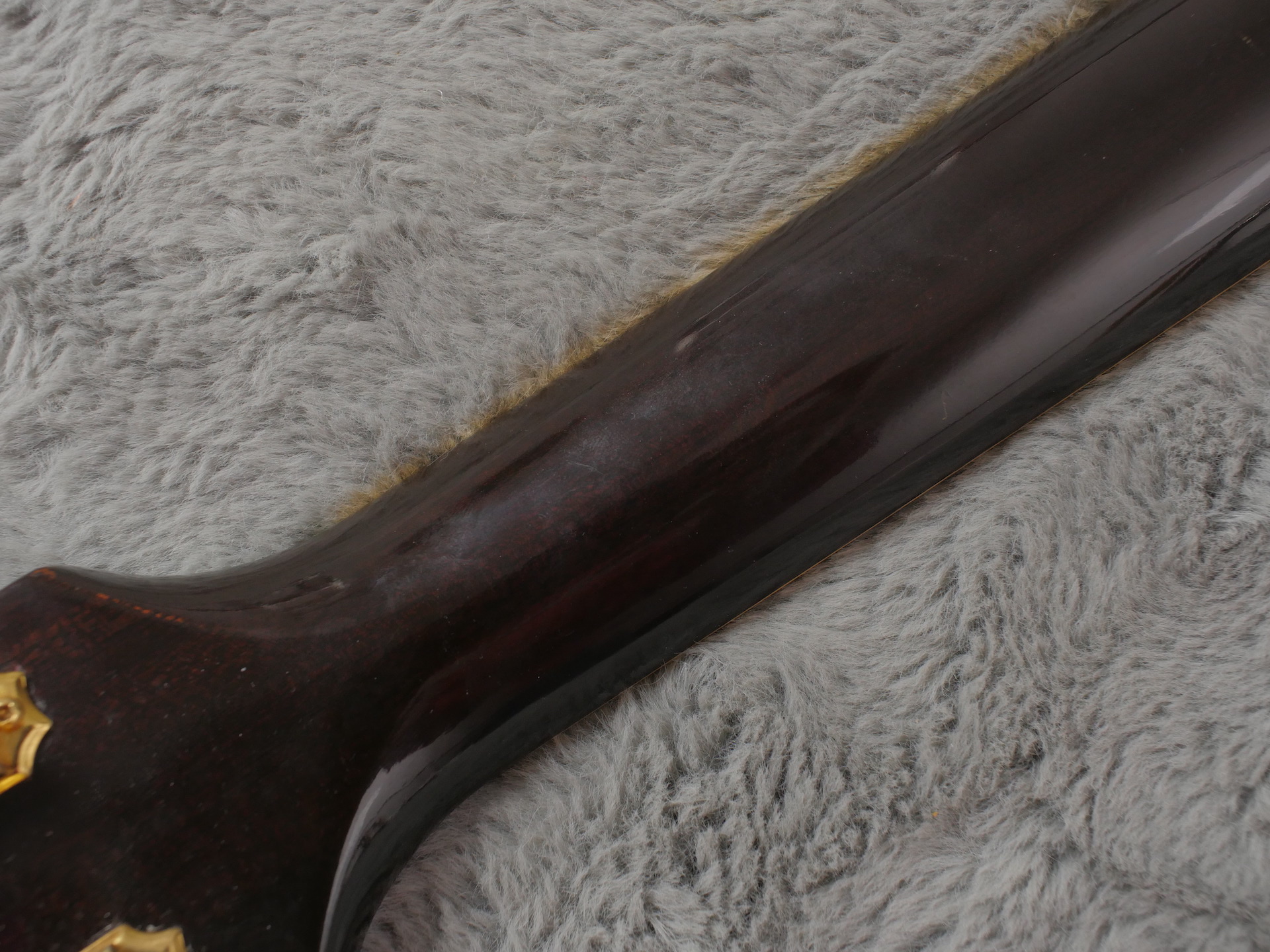 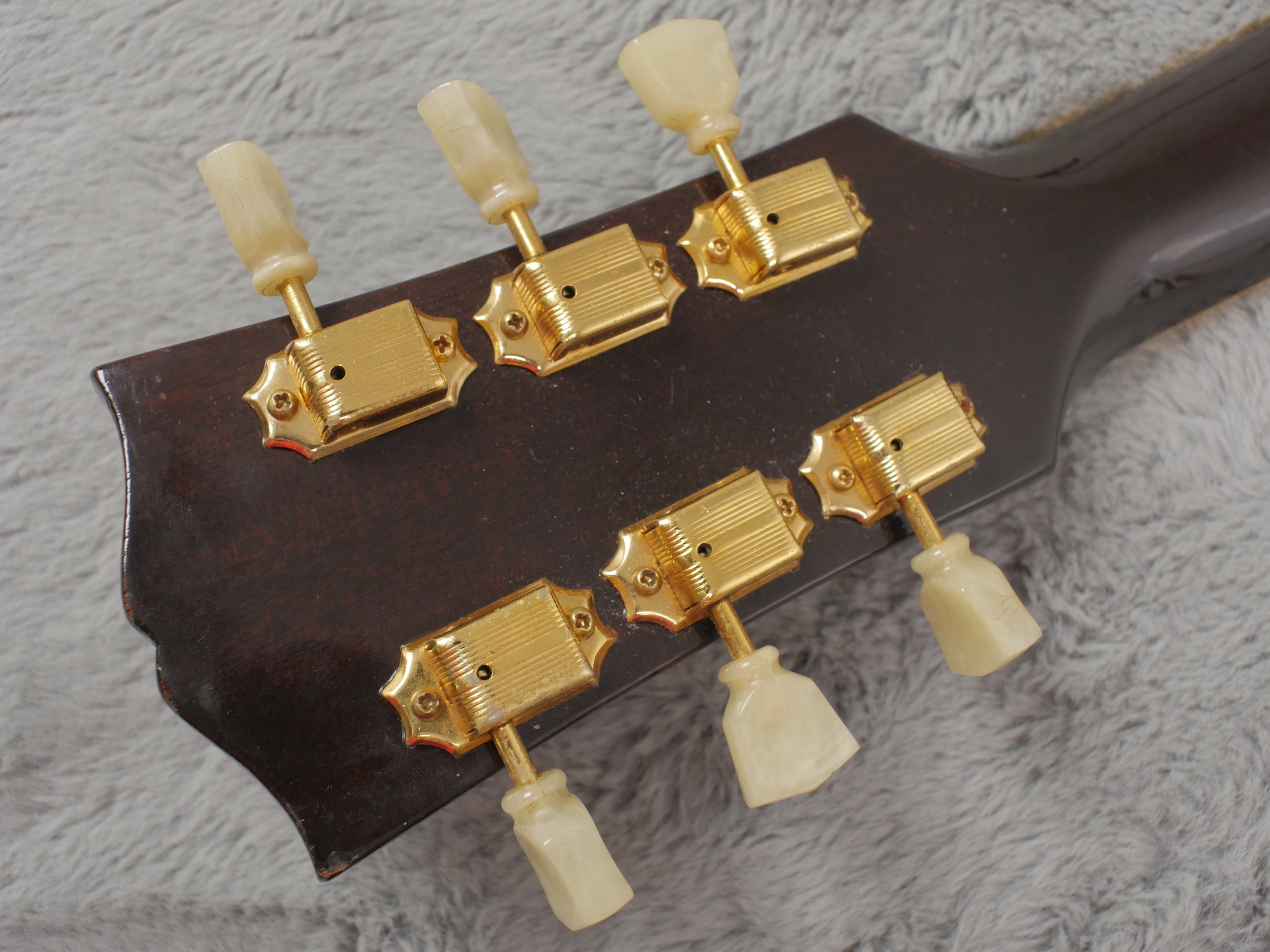 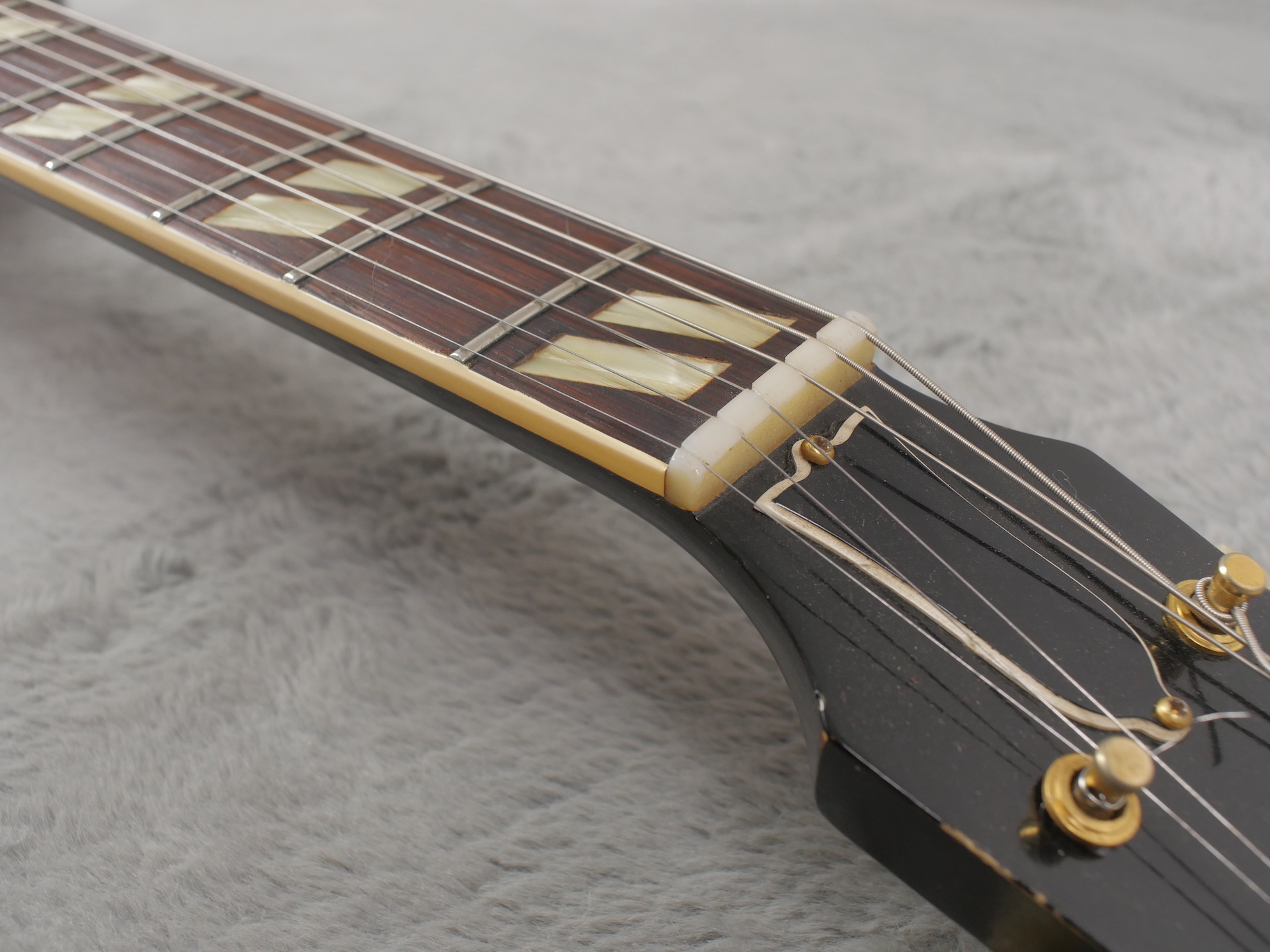 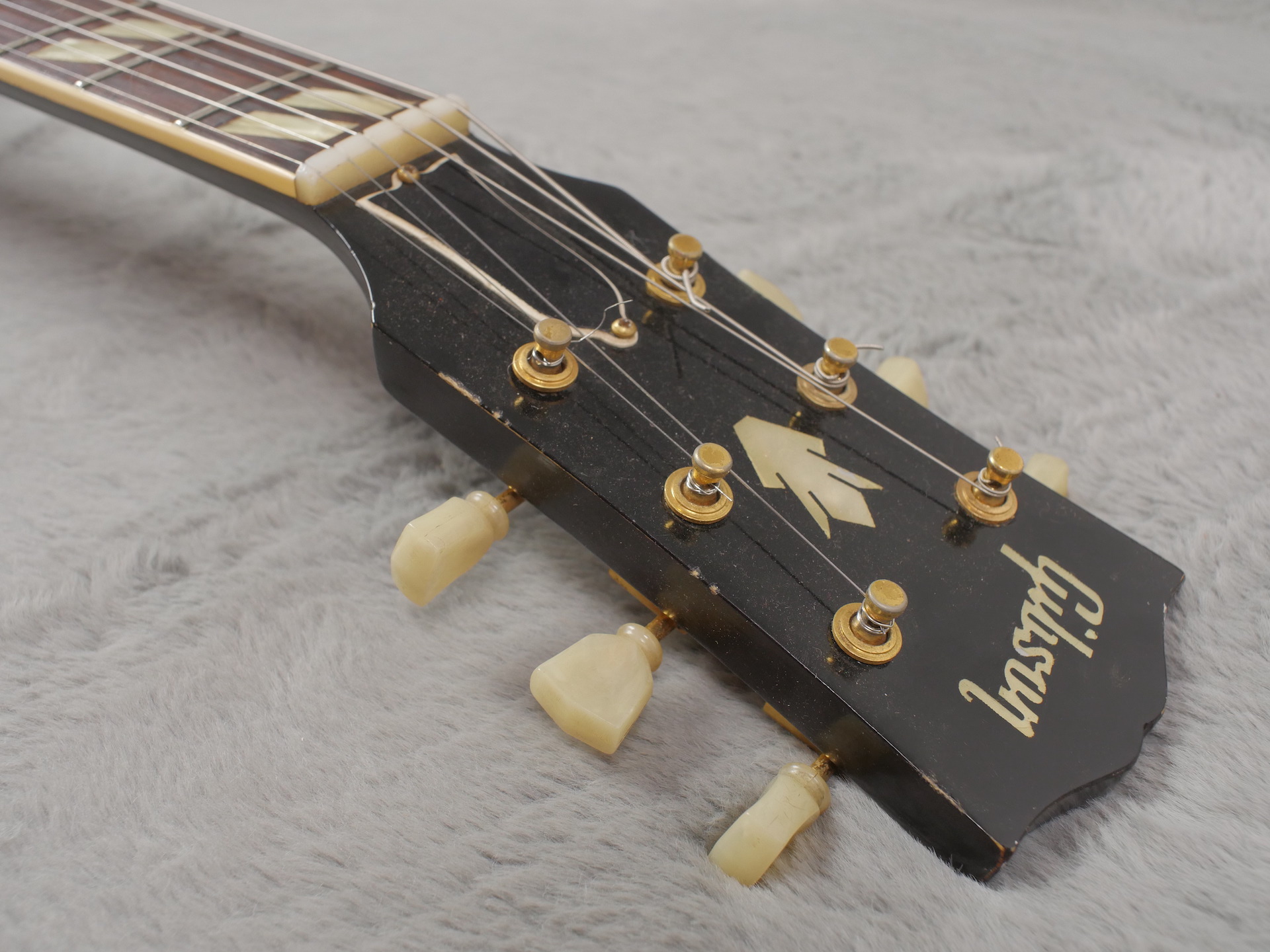 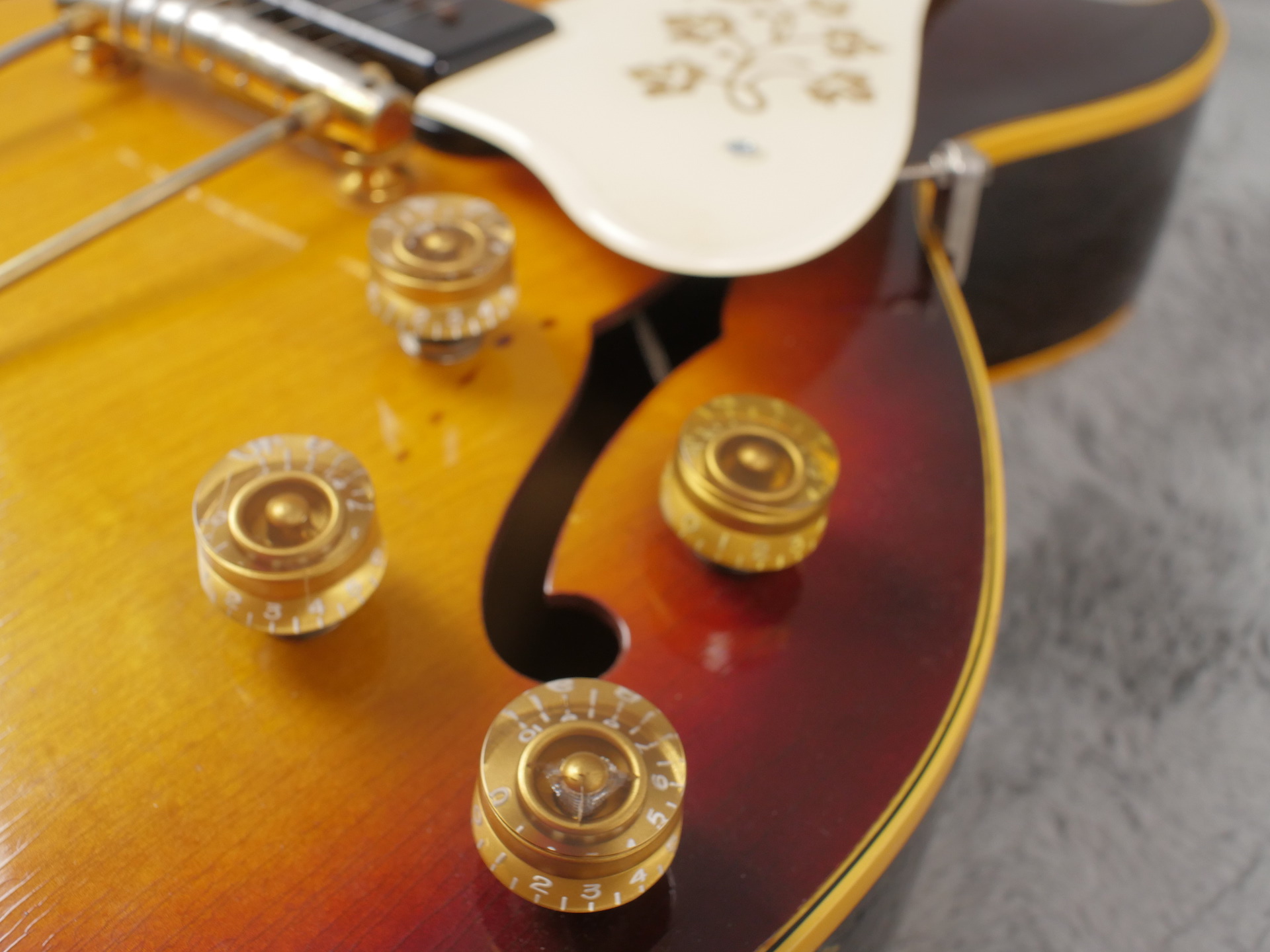 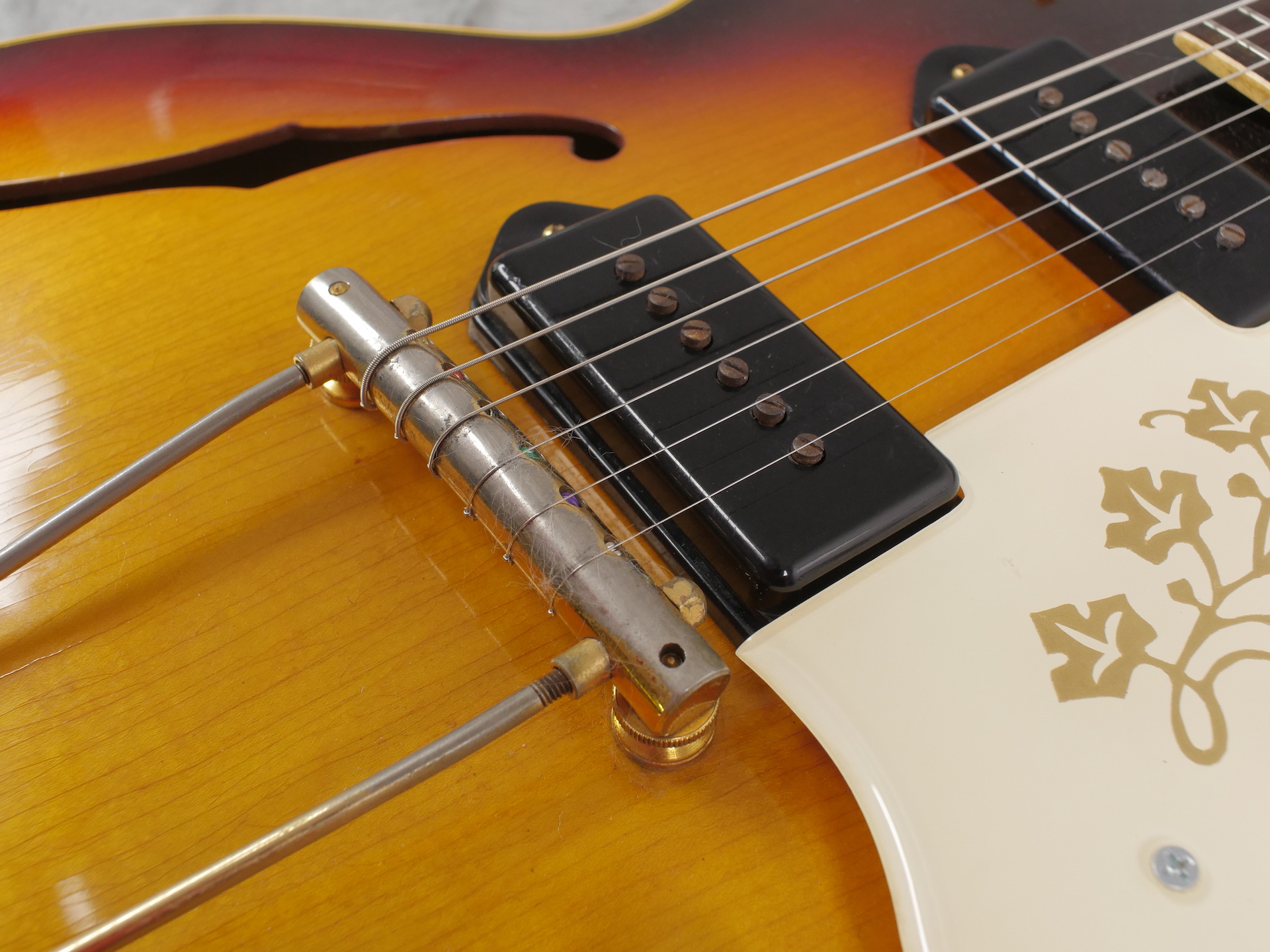 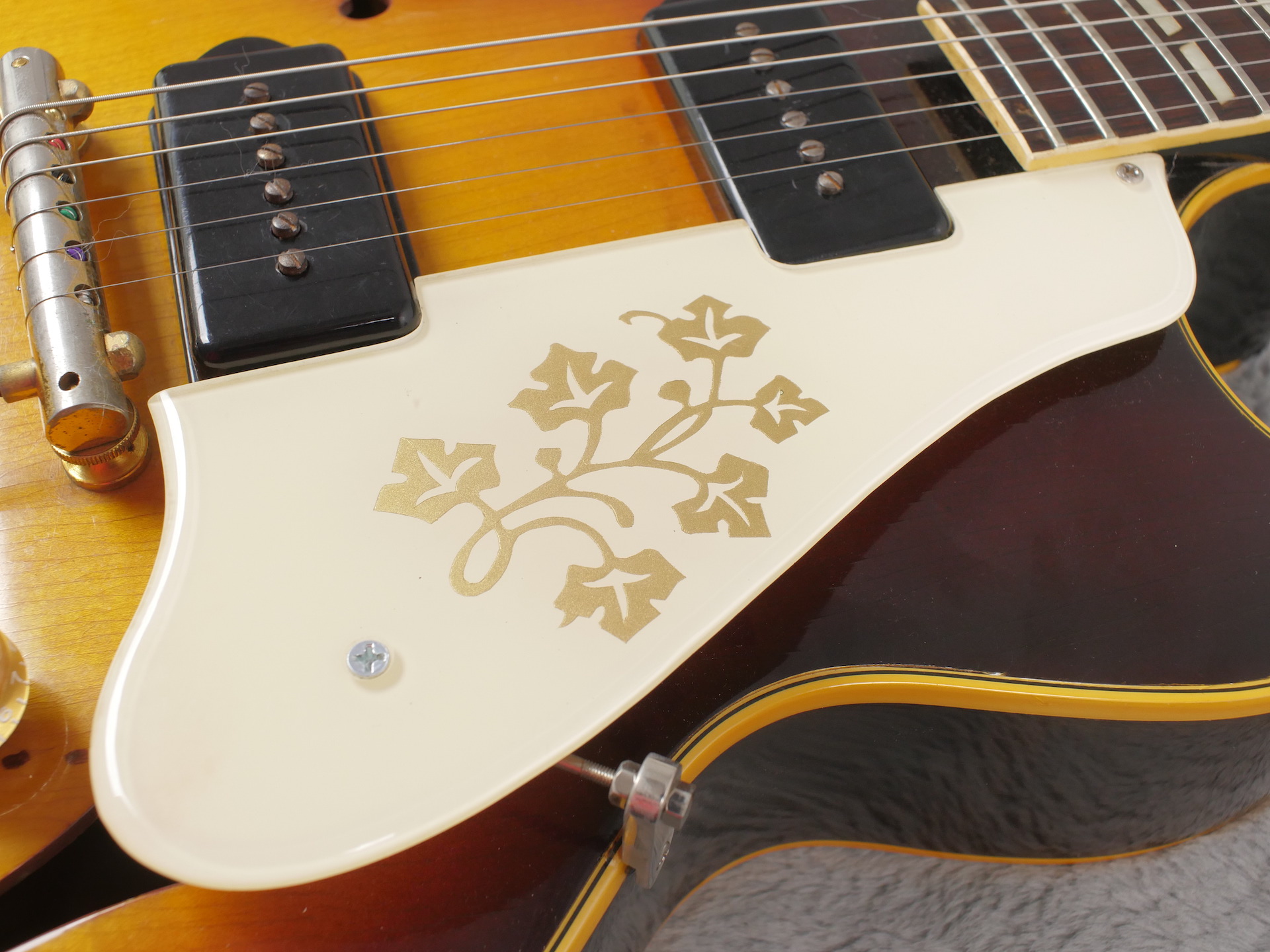 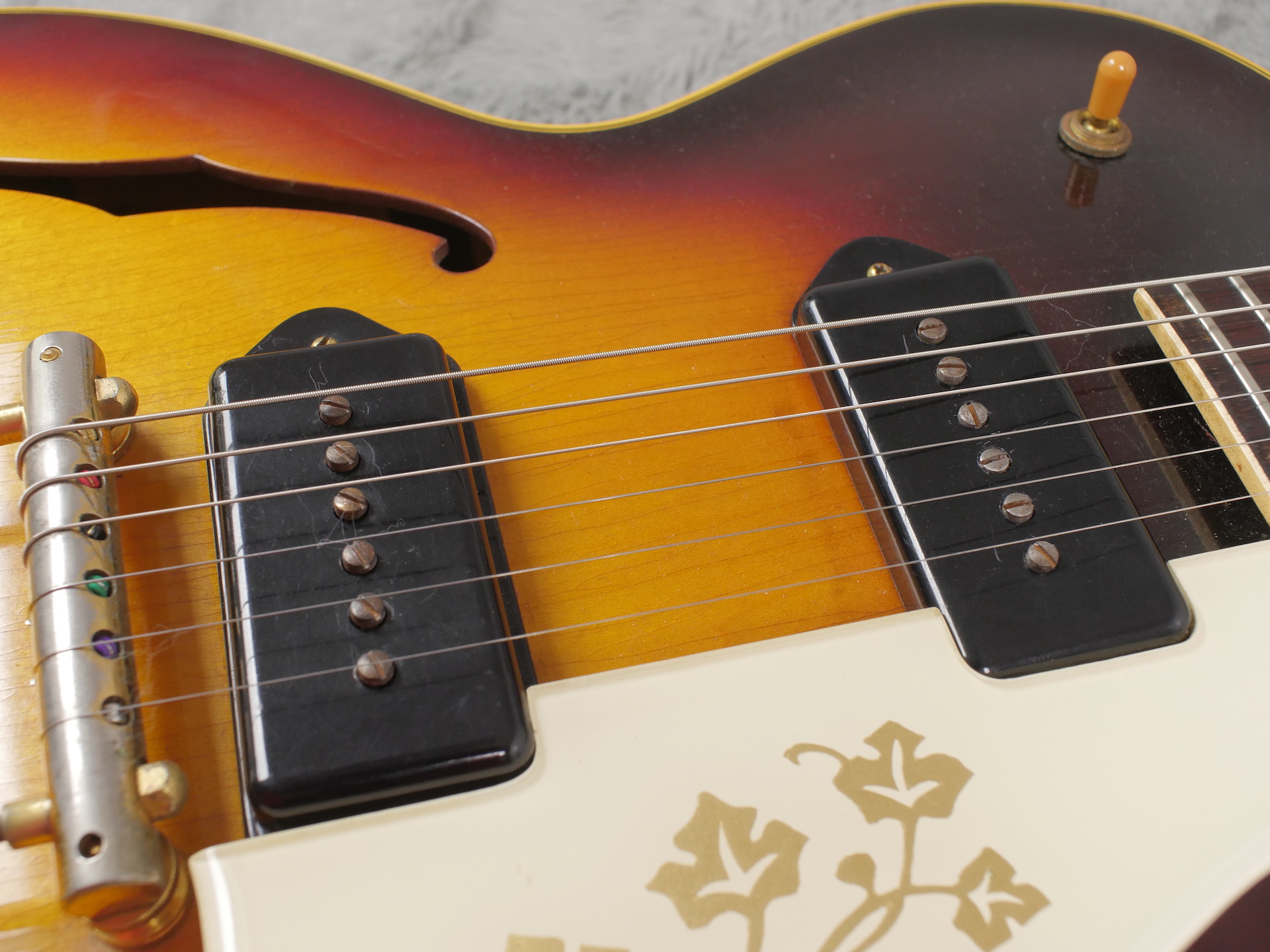 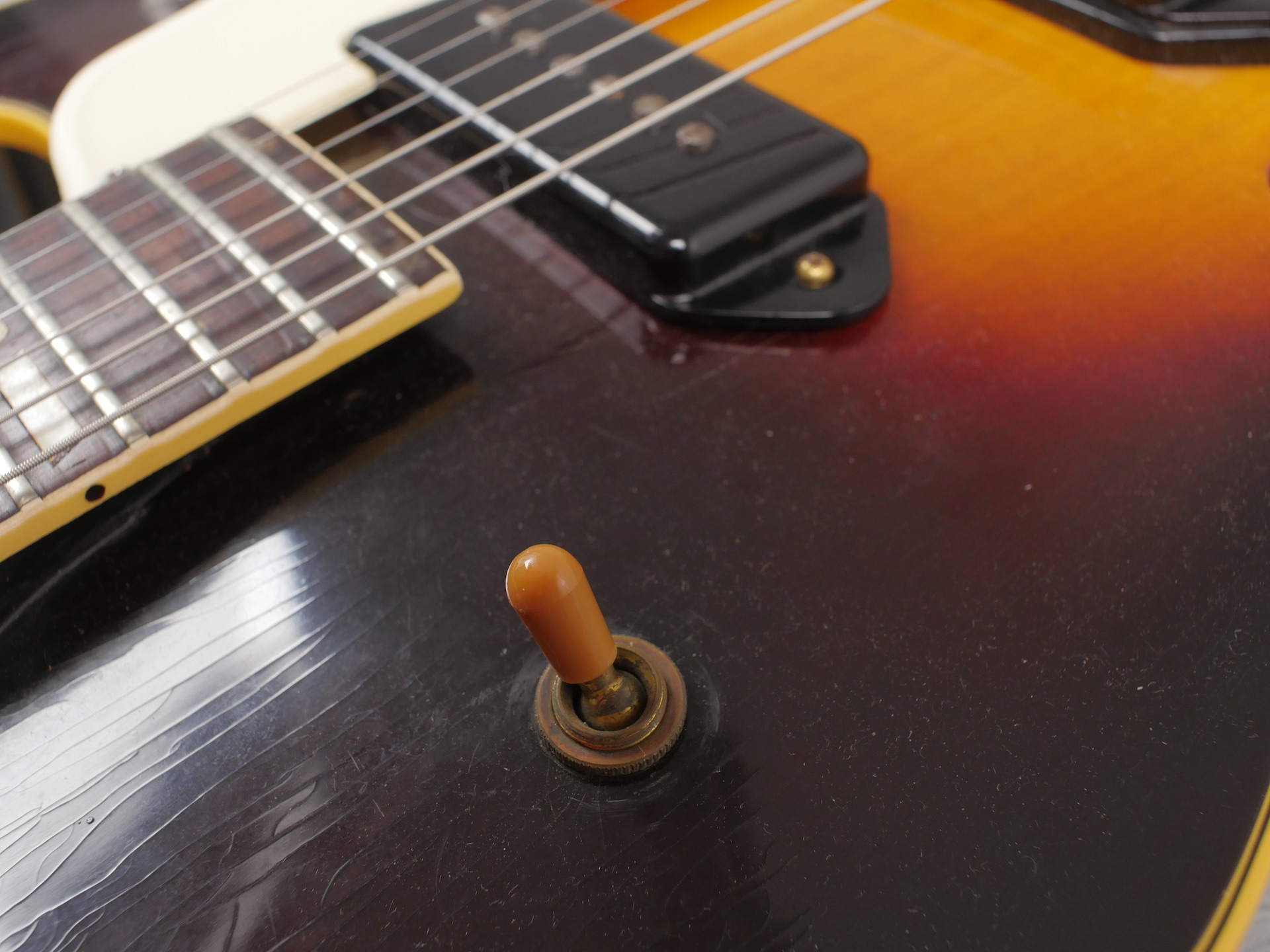 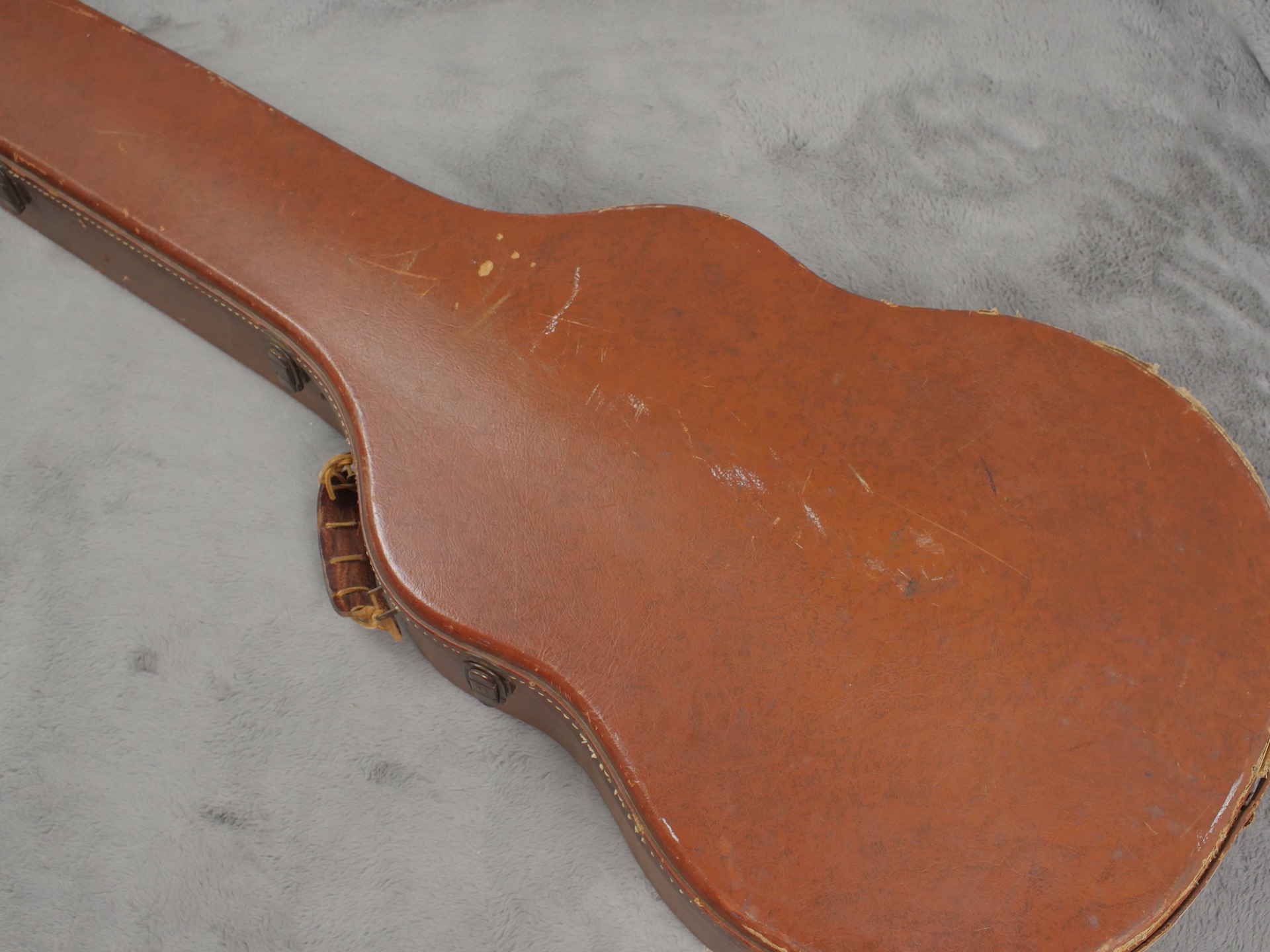