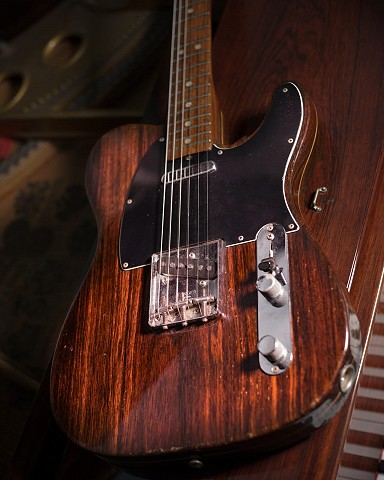 Atop number 3 Saville Row in the heart of Mayfair, five musicians walk out onto a make-shift stage looking out at a bleak, wind-swept London skyline in late January 1969. Surrounded by cameras and a smattering of onlookers, they run through some of their latest songs wrapped up in winter jackets against the cold, before they’re ushered back indoors by the Metropolitan Police, frightened by the disruption and chaos caused by this impromptu performance.

The significance of this concert to John, Paul, George and Ringo and the way in which it signposted the subsequently tumultuous year was yet unclear, but to Don, Roger and Philip basking in the Californian heat it meant a great deal.

Don, or Mr Randall to you, played a pivotal part in the Fender story and by the mid-60s was Vice President, had been chasing the fab four keen to get Fender Equipment into their hands. By the summer of 1968, he was sat across the table from Paul and George sealing the deal. Along with a new Bass VI, Jazz Bass, Rhodes was the promise of a Rosewood Telecaster for George.

Roger Rossmeisl had already had a close connection with the Beatles, though indirectly.

A master guitar maker whose father built archtop guitars in Germany, he was hired by Rickenbaker in 1954 following his emigration and a short stint at Gibson. Roger was responsible for designing the Capri 300 series guitars and the 4000 series basses that incorporate many features that both he and his father had developed. Almost a decade later, these instruments became responsible for the soundtrack to the mid 60’s youth culture explosion on both sides of the Atlantic.

1962 found him at Fender’s door where he spearheaded the Acoustic Guitar Division as well as introducing their first archtop designs. History will show that none of these endeavours quite matched that of the marque mainstays, though his most prominent contribution to the cannon was probably his variations on the Telecaster.

Philip Kubicki, who was another prodigious guitar builder, sat at the master’s right hand. He was employed by Roger for the newly formed Acoustic Guitar Division in 1964.

As Rossmeisl moved to working in the R&D department, them continued to work together developing the semi-hollow Coronado and the archtop LTD and Montego. Both men worked closely on the Thinline Telecaster

As the decade drew to a close, things soured between Rossmeisl and and his employer. CBS recognised that product placement was paramount and his position in the R&D department led to work on one-off instruments for prominent figures. The most prominent of which were the Rosewood Telecaster and a Stratocaster.

The prototypes were constructed utilising a solid rosewood/maple sandwich with the neck being of a two piece composition with the fretboard being glued on as. The whole thing was then finished in a special satin polyurethane finish.

Accounts are conflicted as to the exact number of protoptypes, but it seems that 6 were built with the first being shipped to Elvis Presley (serial number 241177, returned to Fender after a few months as the King found it too heavy), another to Steve Cropper and possibly the most famous to Harrison (serial number 235594).

On completing this one for George, it was taken by courier and flown to the UK where it was delivered to the Apple Offices in December 1968.

It was played almost exclusively on the Get Back and Abbey Road sessions and is seen in the Let it Be film which is where Kubicki saw the guitar again,

“I remember when I saw the guitar for the first time in the Let It Be film. I was so thrilled I almost jumped out of my seat.”

He also used the guitar to record Badge for Cream’s Wheels of Fire album.

Fender put the guitar into production in 1969 with Rossmeisl and Kubicki putting their Thinline experience into use to relieve some of the weight. They also chose to construct the necks from a single piece of rosewood with a maple ‘skunk stripe’ and finished in satin polyuerthane. The unique construction gave the guitars a clear, crisp tone that differentiates them from their alder or ash bodies brethren.

Even with the Harrison connection, the weight and unusual tonality wasn’t popular and the model was finally discontinued in 1972.

Harrison kept hold of his until December 1969 where, following a concert at the Albert Hall with Delaney Bramlett and Eric Clapton, he gifted the guitar to Bramlett.

Regardless of history, the Rosewood Telecaster has this mythical quality for most players and will forever be associated with George Harrison and at one day in January 1969.