Back to Bass VI 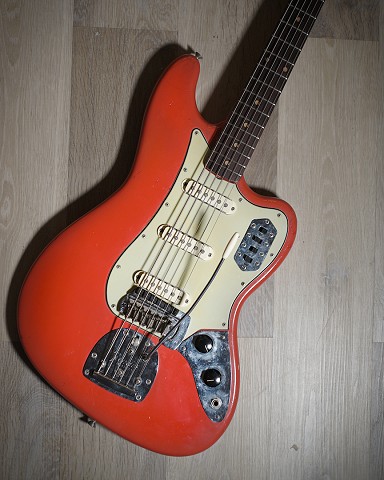 In the technological melee of the 21st century, it can be difficult to really grasp the significance of Clarence Leo Fender and the profound effect he had on so many aspects of the popular culture of the late 20th Century. Not happy to refine the guitar for the post Henry Ford world, he conceived what was in essence a new instrument in the form of the Precision bass. Debuted in 1951, it profoundly changed the way the bass guitar sounded and played.

Ok you might say, now where is this going? Well hold on, and I'll explain...

Unlike Fender’s six string offerings, the Precison bass’s role was initially unclear. Could it be considered an alternative to the upright bass as it was infinitely more portable or was it a way for guitarists to earn extra money? As if to answer the question, Danelectro step into the picture with the UB-2 in 1956.

The '6 string bass' was marketed as -

"A brand new instrument that combines the best qualities of Spanish guitar and big string bass."

It featured a 30" scale, placing it at the midpoint between the 34" Precision Bass scale and the 25 1/2" scale that Leo adopted for his guitars. With six strings, tuned an octave below that of the guitar, it was familiar territory for guitar players looking for something a bit different. This plus a price tag of $135 (the Precision retailed at $219) made this instrument an attractive prospect.

By no means an instant hit, Danelectro’s instruments found favour with a certain Duane Eddy who stumbled across a Longhorn 4623 in a guitar store in Hollywood in 1959, saying later that,

“Hey, maybe somebody who likes my sound has made a whole guitar based around it”.

He used the guitar to record the whole of his next album The Twangs the Thang. His hit Rebel Rouser from the previous year was also notable as being one of the first records to marry the six string bass with an upright bass. Using two players to double the parts (the second played on the 6 string bass with a pick to give it a percussive quality), the technique was dubbed click or tic tac bass. Nashville producers put this combination to use on tracks by Elvis (Stuck on You) and Patsy Cline (I fall to pieces). The instrument’s place was secured.

Cue Leo Fender. Never one to pass up on a trend, Fender introduced their own in 1961. Taking its styling cues from the Jazz Bass and the Jazzmaster, the ‘Fender VI Electric Bass Guitar’ cut a more refined figure than its competitors, all futuristic and chrome appointments.

It united the same 30” scale length with a 1 9/16” nut width giving it an equally tighter string spacing. The Jazzmaster tremolo and bridge upped the ante and combined with three single coil pickups gave it a wide tonal palette.

An early adoptee of the instrument was former Shadows bass player Jet Harris whose hits Besame Mucho and Main Title Theme from Man with the Golden Arm both feature the unmistakable sound of the Bass VI and are a must for those of you looking to hear the instrument for the first time.

Unfortunately, it failed to inspire the bass playing fraternity who found the tight string spacing too cramped and as such relegate it to a destiny working on its studio tan. It still played its part in countless recording sessions in the hands of players such as pre-zeppelin John Paul Jones, various members of the Beatles (specifically during the recording of the White Album, in the hands of John Lennon and George Harrison) and myriad other pop hits throughout the 60’s. Rare were the live outings, Jack Bruce and ‘The Fool’ painted Bass VI, John Entwhistle (who lasted 6 months before replacing his with a Precision Bass) and Roy Babbington of Soft Machine.

As you’d expect, Fender made changes to the design. 1963 saw the addition of a bass cut switch and new pickups following on from the introduction of the Jaguar though production figures show that no more than a 100 were produced by the company each year prior to the take over by CBS, where it remained in the catalogue until 1975.

Now, don’t be sad for the humble Bass VI. Although it wasn’t destined to be a Telecaster or a Precision Bass, blazing a trail that others would follow, it hasn’t faded into mists of time. Players such as Robert Smith of the Cure and the Church’s Steve Kilbey stumbled across this guitar in a search of that something different and made it their own. Limited production numbers makes early examples desirable and as with any Fender, custom colours are always the top of the list.

So much more than an oddity, this is lesser known of Leo’s children is one you should all get your hands on..

The one we have pictured here is a recent acquisition of ours and a very rare custom colour Bass VI in original Fiesta Red.