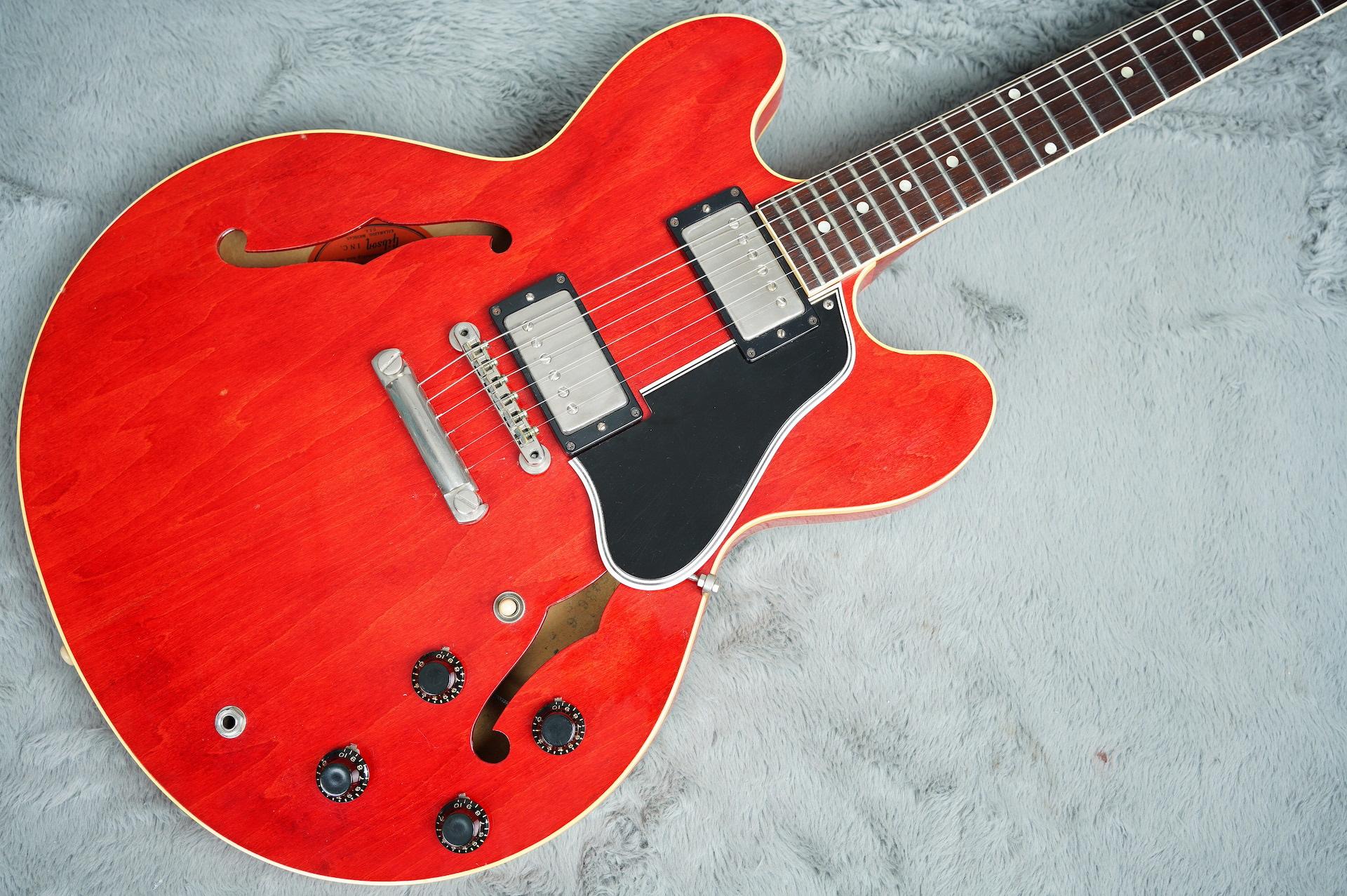 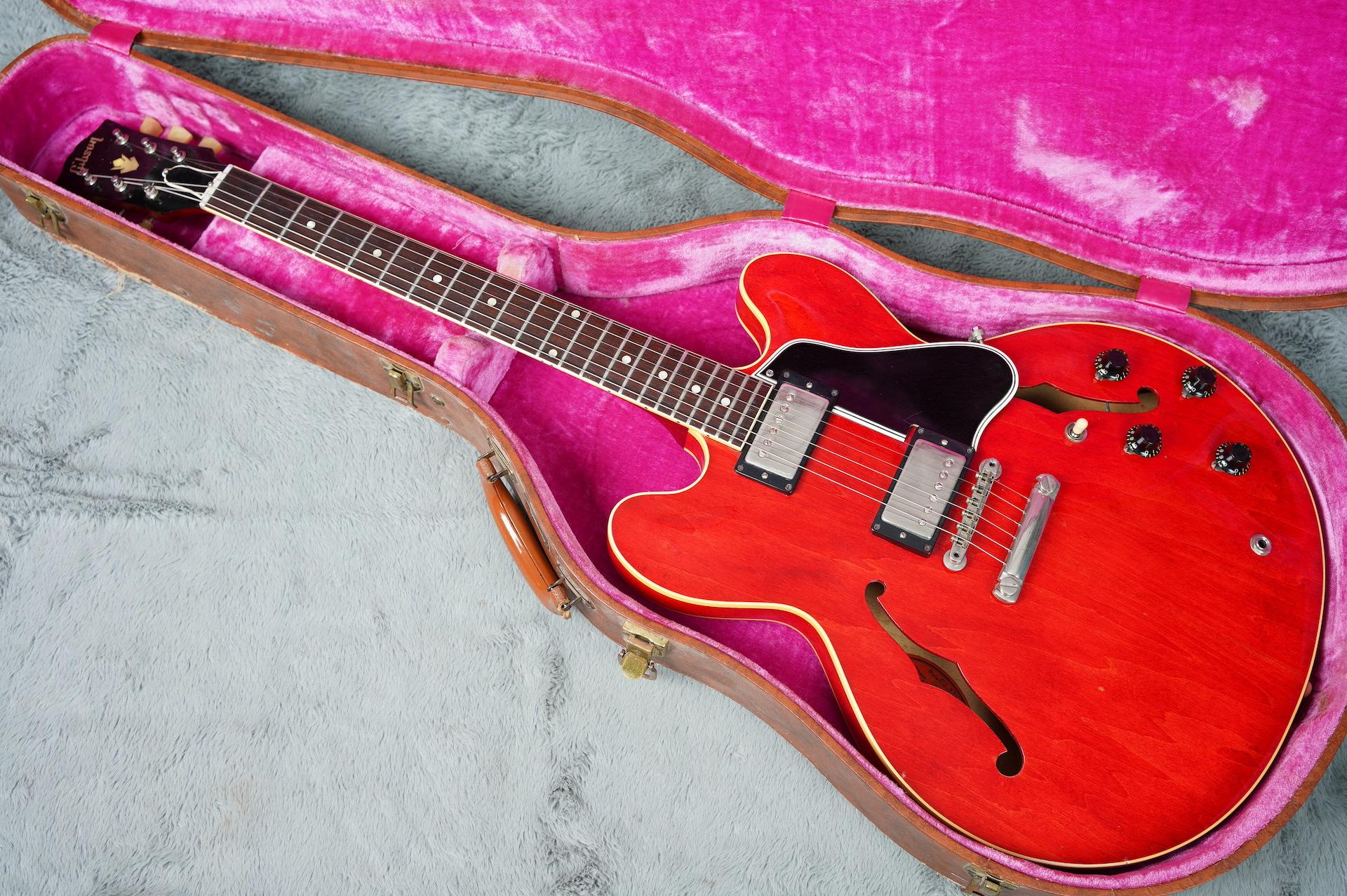 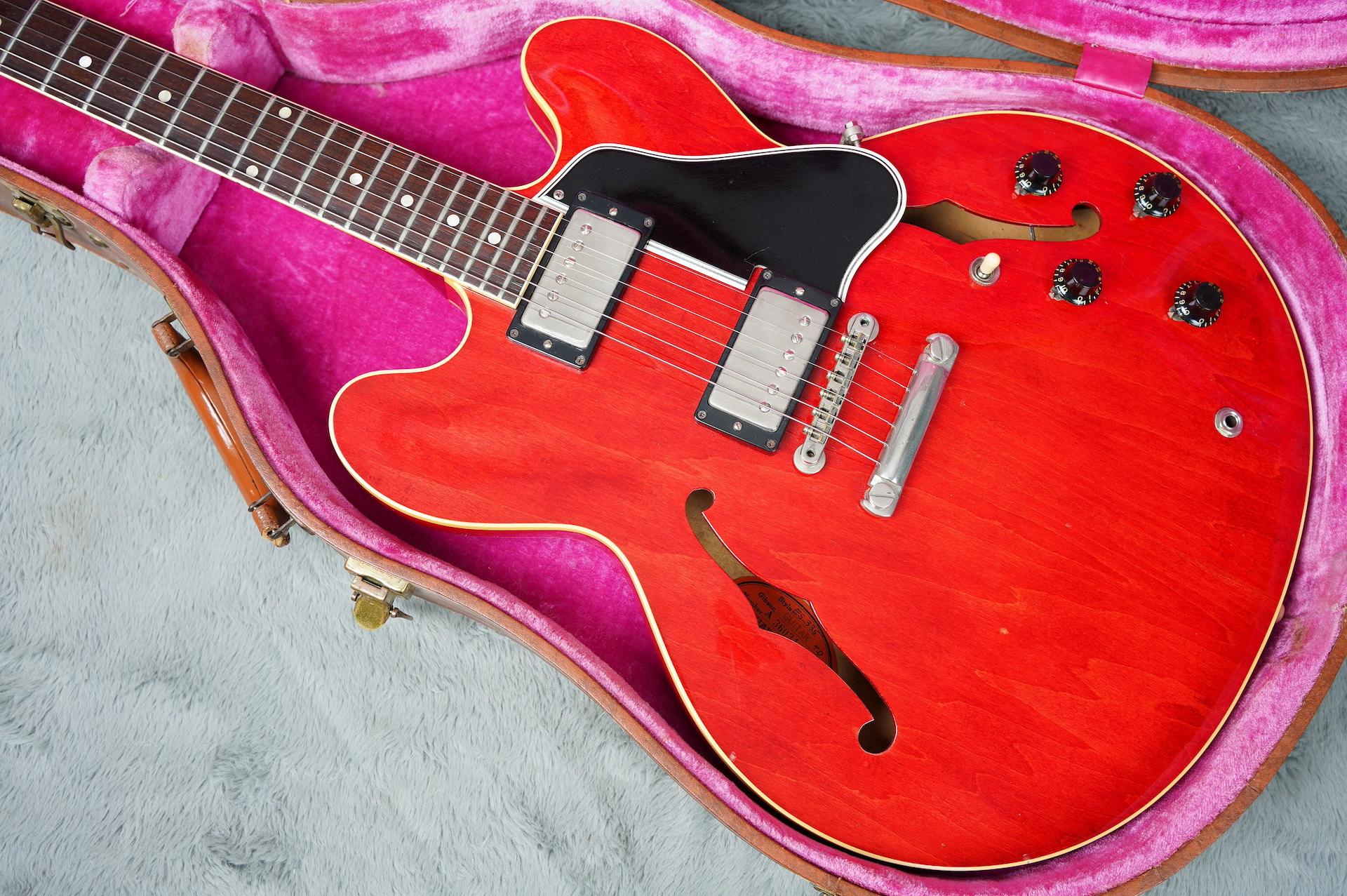 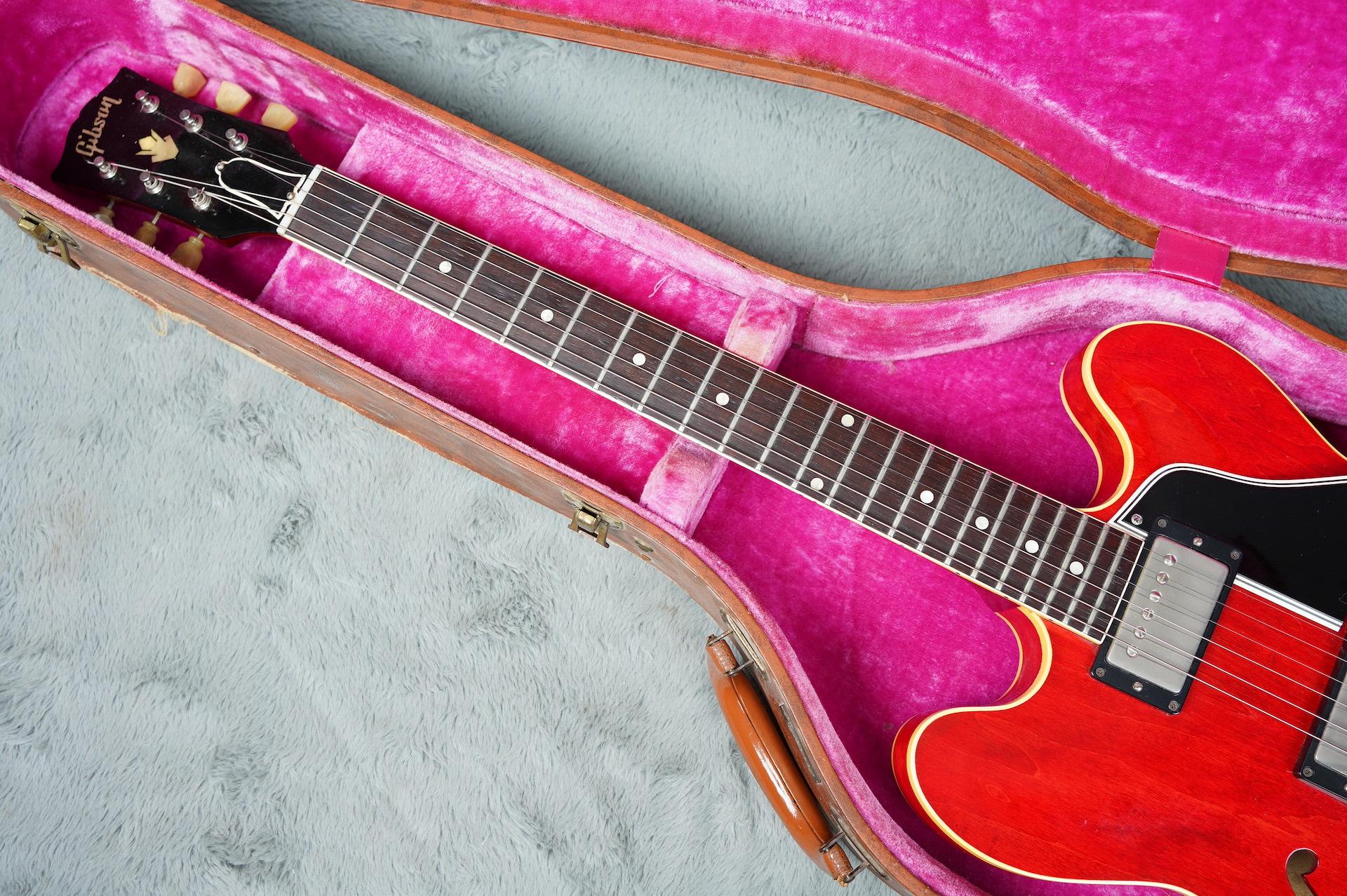 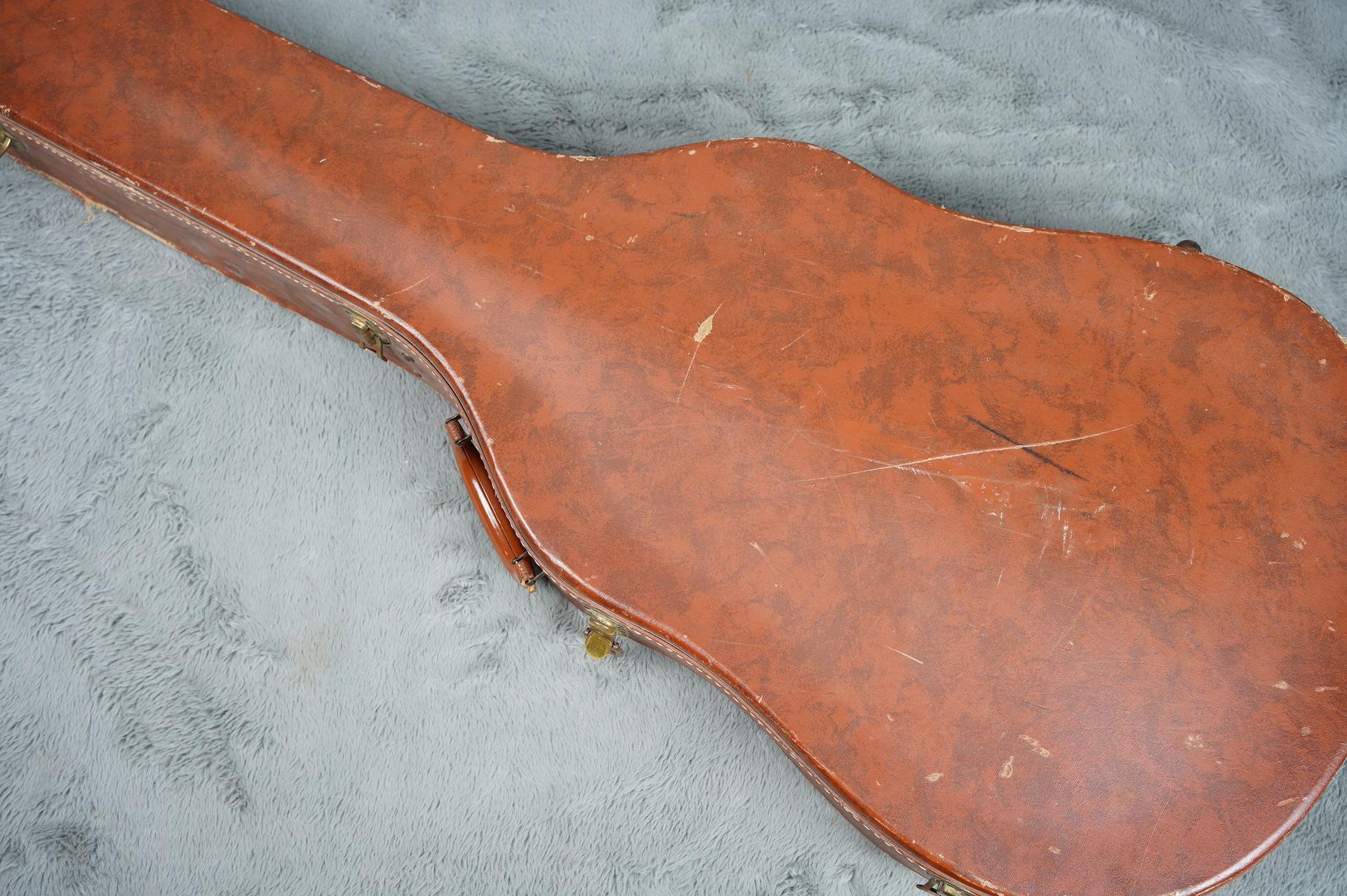 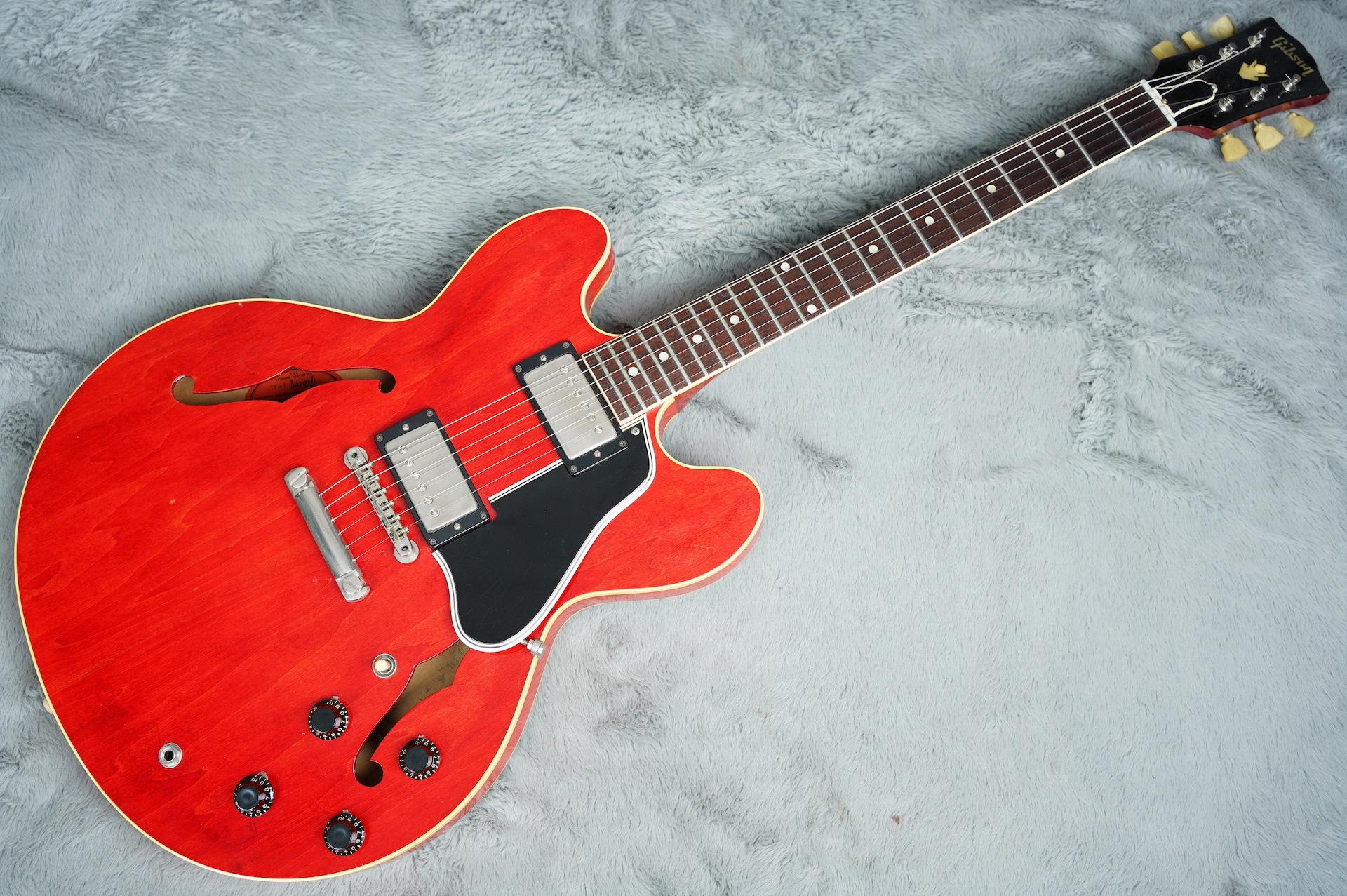 Debuting in 1958 with its ground breaking design, the ES-335 and its brothers the ES-355 and ES-345 where the top dogs of the Gibson semi acoustic range and each featuring the option of a cherry finish from 1960 that so defined the look of Gibson guitar to come. However cherry red ES-335’s from 1960 and early 1961 are pretty thin on the ground, which is a shame as it was the classic watermelon period of Gibson’s cherry red.

Resplendent in its rare, almost unfaded watermelon coat, this guitar looks too good. A great example of that classic cherry fade, this guitar has been well cared for and is in near MINT condition. Both front and back are free of any real wear. The back has a few marks but nothing too severe. The neck too has very little in the way of wear and overall, this is probably one of the best dot neck ES-335’s we have seen in a very long time.

This guitar having a ‘R’ FON number was conceived in November 1960 have completed its final assembly in early 1961 at a time when cherry red ES-335’s were very thin on the ground as they still are today. Especially dot neck one’s in near mint condition and in watermelon finish!

The hardware is in beautiful condition too. The guitar has always been a stop tail, it has never had a Bigsby or any other kind of tailpiece fitted to it. The ABR-1 bridge is a lovely no wire original, the tailpiece is correct and it has two original PAF’s which have a powerful and tuneful.

The plastics are in great shape. Pickguard is an early short type, the bonnet knobs are original bonnet knobs from the 50’s and are in near mint condition like the rest of the guitar, maybe more what you would expect to see a few months earlier but they have obviously been on the guitar for a long time and are correct 59, early 60 type. Pots are all made by Littelfuse (manufacturer code 230) all have nylon, knurled shafts and all are dated 48th week of 1959. There is no solder that has been disturbed anywhere.

Tuners are original Kluson no line Pat Applied For single ring tuners that you would expect to see on an earlier Gibson, there is no evidence of any other tuner holes on the headstock so maybe these were put on when the originals crumbled…?

The guitar comes with a correct Gibson brown Tolex case with pink lining.

Both pickups on this guitar sound great and are very evenly balanced. The neck pickup is really accentuates the wood tones without loosing any definition whilst the bridge pickup really delivers that bite that you only really get from a classic and original PAF pickup.

If you’re looking for an ES guitar then you can’t go much wrong with this one. Cherry red vintage ES guitars, ones from 1960/61 faded like this are very rare and pretty desirable it may not hang around very long…